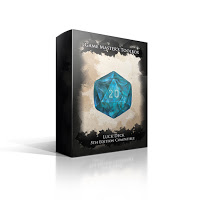 I’m a sucker for cards and special accessories for a game, especially in Dungeons and Dragons. I’ve got a Tarokka deck, a Deck of Illusions, a Deck of Many things, some magic item cards, some NPC and monster card references. I like cards, and I probably like convincing myself that those cards aren’t just pretty toys and have a practical effect on running the game.
This time around, I picked up four of the decks offered by Nord Games. The decks in question are the Critical Hit Deck for Players, the Critical Hit Deck for GMs, the Critical Fail Deck, and the Luck Deck.
Nord Games–Cards

The Luck of the Draw

Each of these decks is 52 cards, including an OGL card and an instruction card. The artwork and formatting on the cards is very attractive and professional (although if you don’t want to see a partially dismembered orc, you may have a hard time with the card backs for the Critical Hit Deck for Players).
The Luck Deck has two different card backs, with red cards with a d20 showing a 1 on them, and a blue card with a d20 with a 20 on it, to differentiate between the good and bad luck cards. The other cards all have the same card backs for all cards in the 52-card deck, but the borders have signifiers that indicate when the cards should be introduced (level 1, 5, 9, and 13 are suggested).

Luck Deck
The Luck Deck is split between good luck and back luck cards. Whenever a player rolls a 1, they draw a bad luck card. Whenever they roll a 20, they draw a good luck card. The player can only ever have one of each. The GM can trigger the bad luck card whenever they want, and the player can turn in their good luck card to trigger its effects.
Some of these effects I would be very hesitant to trigger as a GM. There are cards that can cause the player to roll a die and subtract that number from their saves, to trigger attacks of opportunity, or automatically fail rolls. I don’t mind bad luck when it’s random, but I dislike being the person strategically choosing when to trigger that bad luck.

There are other options I really like. For example, an NPC taking a dislike to a PC, going last in the initiative, losing items, or having gear temporarily malfunction are all things that feel less like a serious detriment and feel more like a minor setback.

The good luck cards are largely the positive mirror of the bad luck cards, although there are cards that suggest things like treasure being doubled when it is found, as being able to decide the character’s spot in the initiative, adding an extra die to rolls, and having advantage in certain situations.

My suggestion on this one to make the bad luck cards feel a little less aggressive in implementation would be to say that they trigger the next time they apply. Even if you don’t adopt that practice, any of the cards that negate or apply penalties to rolls should really be triggered before the player rolls anything, so that it feels less like the GM is robbing them of a success. 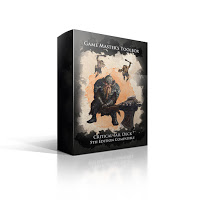 Critical Fail Deck
Like the critical hit decks detailed later, this deck uses the suggestion mentioned above, where some cards are not introduced to the deck until characters are higher level. Any time a player rolls a natural 1 on an attack roll, they draw a card and apply the card’s effect.
Even though there are levels of severity for the critical fail effects, the effects feel much more random than the critical hit effects. Characters often get a saving throw against the effects of a fumble, although the DCs get much more difficult with the higher tier cards. Effects can range from losing ammo, damaging a weapon, breaking a bowstring, or taking a penalty to attacks for multiple rounds, to triggering attacks of opportunity from everyone in the character’s vicinity.
There are 24 of the lowest tier cards, 16 of the next tier, 8 of the next highest tier, and 4 of the most devastating of the fumble cards. This is the same distribution that the critical hit decks utilize as well. There are four different effects on each card, divided by melee, ranged, natural, or spell attacks. The critical hit decks (below) have these same categories. 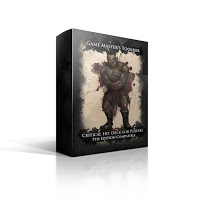 Critical Hit Deck for Players and Critical Hit Deck for GMs
While there are some effects that do not deal specific damage, the difference in tier for many of the cards in these decks goes from x2 to x3 to x4 at the higher end. The lowest tier might have either a very minor secondary effect, or an effect without any damage. Some of the higher tier x4 cards include secondary effects that are almost certainly fatal if the damage exceeds ½ the total hit points of the target, or create a serious setback if they exceed ¼ of the total hit points.
The GM deck has fewer of the dismemberment or fatal secondary effects, but it includes crits that allow for follow up attacks, damaged gear, and fear saves. In addition to having more cards that maim and dismember, the player deck has a few cards that include “full damage, plus roll damage again,” ensuring more consistently high damage instead of just increasing the potential for extra damage.
While the Critical Fail deck divides the deck into tiers and advises users not to add all the cards into the deck at 1st level without assuming some devastating results, that is even more true of the critical decks. It’s also worth noting that automatically dying if you take your full hit points in addition to being brought to zero hit points with an attack is probably going to see a lot more play at the table if you are using these decks.

Decks of Future Past
As a quick aside, towards the end of my time running Pathfinder on a regular basis, I was using the crit deck and the fumble deck regularly. Games based on d20 rules can be very swingy, and adding in the randomness of critical hits and fails just makes that more evident. One thing that became apparent is that, given that players often outnumber the big boss monster, no matter how well the actual deck is constructed, it’s more likely your singular boss is going to suffer from the wilder effects than the players, although 5th edition’s legendary actions make up for this with some creatures.
A Good Reading
The cards feel solid, and are attractive. I really like the idea of having something to hand out for natural 1s and 20s outside of combat, because those natural rolls may not equate to automatic failures or successes, but they have meaning with the Luck Deck in play. I really like the concept of the tiered critical categories, and it helps to reduce some of the potential swing inherit in the system.
The Trap Card!
There is the potential for a random draw to end an encounter with much less drama than you may want. The Luck Deck seems like it could be a lot of fun, but could easily feel adversarial depending on the draw and when the cards are triggered. Many of the results in the Critical Fail and Critical Hit decks involve taking a random penalty for a random period of time, which is the kind of fiddly bookkeeping that 5th edition tends to avoid.
Qualified Recommendation–A product with lots of positive aspects, but buyers may want to understand the context of the product and what it contains before moving it ahead of other purchases.
I think these cards are well made, and a lot of fun. However, good or bad rolls are part of the design of the games, but adding good or bad rolls with good or bad draws can make for sessions that feel like they were much more dependent on randomness rather than tactics or character capabilities.

For games where players and GMs may enjoy emergent, significant challenges rooted in the game rules, these are going to generate a lot of positive results. For people that want a little more player agency and choice in how heroic or chaotic a game becomes, the critical hit decks may be less desirable, but the Luck Deck may still be fun to introduce.

Given that I’m reviewing multiple products, I think all of these are well made, but I think introducing all of them in the same campaign may be a bit overwhelming. In fact, my recommendation would be to use the Luck Deck in a game utilizing standard critical hit rules, and possibly even carefully consider having the critical fail deck in the same campaign with the critical hit decks.

That’s a broad recommendation. Some people may want maximum random elements, and that could be a lot of fun, so long as everyone is on board with the massive swings in fortune that could be introduced.
I also think these cards could be a lot of fun to play with in a one-shot, or in an adventure to achieve something like the “Meat Grinder Mode” introduced in the Tomb of Annihilation.
Fun, well-made product, just be aware that the “story” of the game could easily shift to the crazy results of the dice and the cards.