What Do I Know About Reviews? Game Master’s Toolbox Treasure Decks (5e OGL) 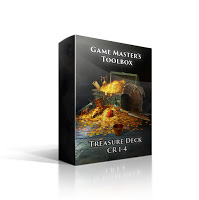 My most recent D&D related acquisition was purchased because I’m kind of lazy, and because I like gadgets. Nord Games (the same team that produced the Critical Hit, Failure, and Luck cards I previously reviewed) also have Game Master’s Tool Box Treasure Decks. These decks are divided by CR, with a separate deck for CR 1-4, CR 5-8, CR 9-12, CR 13-16, and CR 17-20.

Yes, you can roll on the treasure charts in the Dungeon Master’s Guide, and that’s fun. But sometimes you don’t want to reference separate charts when it comes to your coins, valuable items, and magic–but you don’t want to just reduce all of your treasure to a flat gold piece amount.

The Treasure Decks address this issue, by having several pre-generated treasures on each card, but with each treasure fully fleshed out. Rolling a d12, you get a result on the card that indicates a treasure that might have various coins, valuable items, and magic described on the cards.

The decks are attractive and the cards feel solid, just like the other Nord Games products Iooked at in the past. The face of the cards is a simple parchment color, with a chart that has various entries corresponding to a d12 roll. The back of the card has nice, professional art depicting some kind of treasure hoard, and each tier of treasure has a different card back.

When magic weapons or armor appear, there is a description of what the item looks like. Some magic items are listed with minor quirks. My favorite is the magic scroll that will naturally crawl away from people of a certain alignment as if it were alive and slinking away from that character.

The quirks that I saw were interesting enough to be evocative, without drastically altering the usefulness of the item. For someone that just wanted a quick way to generate treasure, the descriptions are a definite bonus.

The decks also contain a card that explains how to utilize the decks. The suggested method of utilization says that the players can draw a card and then roll, or the GM can draw the card and determine the treasure on their own. Additionally, the suggested means of generating a hoard is for the player or the GM to draw and roll on an additional card until they finally roll a 12.

I was curious to double check the guidelines in the Dungeon Master’s Guide for treasure after reading this. According to the DMG, creatures known for hoarding treasure should get “at least” two rolls on the standard treasure by CR table. While “rolling until you get a 12” may produce a sizable hoard, there isn’t really a hard and fast rule being strained by this method, and it would be easy enough to set your own comfort level for how many cards to utilize.

Side Note: How Well Do We Know our DMG?

It seems like every day, there is something that comes up that is covered in the DMG that I didn’t know as covered. In this case, in looking up expected treasure, I noticed that the Dungeon Master’s Guide actually gives a recommendation on how much adventurers should get paid when they get hired for a job–a randomly treasure equal to the CR of the average party level.

The cards look great, and they have huge number of potential treasure on them, so it’s unlikely that the cards will lose their utility unless you hand out a phenomenal amount of treasure. The details make the treasure evocative without adding too much detail. The formal preserves random generation but cuts out referencing multiple tables.

My biggest complaint with these cards is that the only way you can tell what tier of card is indicated is by looking at the back of the cards. The other cards, such as the critical hit and failure cards, have an indicator in the upper corner referencing any level based recommendations, but the cards only have the random treasures listed on them.

In order to keep in mind what tier of treasure the deck generates, you either have to memorize the what image goes to what deck, or you need to keep your cards in their original boxes when not in use, which eliminates the ability to sleeve them. To their credit, the different card backs have some clues that the treasure in the deck is a little bit more epic with what is depicted in the pictures, but it’s still not the fastest way to process something that is designed for ease of use.

Overall, if you are running a game of Dungeons and Dragons and are likely to use randomized treasure at any point in time, these cards are going to be useful. Additionally, because they are divided by tier, you can always pick up the ones relevant to your game and get the rest later on.

As long as you don’t mind memorizing the images, keeping them in their original boxes, or coming up with your own system for keeping them organized, these cards should be a good addition to your collection.