Maps in RPGs, As Inspired by Sean and Brett (Gaming and BS 212) 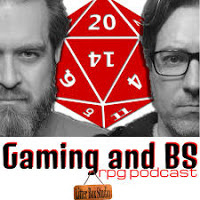 And now for my rambling.
Old School Mapping

I think one thing that always gets tricky is that while it feels like a fun, old-school thing to see how the player’s maps differ from the GMs based on how they interpreted their descriptions, in some cases that literally saying that the PCs, the characters in the world, misunderstood what they were personally perceiving. While that works for intricate designs or camouflaged ninja deer, something like assuming there are only two passages out of a room where there are clearly three isn’t something the PCs are likely to do, but I’ve seen GMs that will run with that because “the players weren’t paying attention.”

I honestly think that unless something is meant to be hidden or to be presented as a puzzle, it’s the GMs job to make sure the players understand their environment at least as well as their PCs would. If you are getting upset that your players didn’t pick out simple details in your description of a normal cavern, maybe your description of a normal cavern was too simple for them to latch on to. A simply 40 by 40 room with three 10 x 5 archways cut out of stone with no adornment isn’t really that memorable, so of course your PCs aren’t going to latch on to that like they would if one wall was made from corpses mortared together with some kind of congealed, slimy black substance.
Or, to put it differently, if something is suppose to be a simple decision (do you go to archway 1, 2, or 3), don’t try to “gamify” the PCs remembering what you said.
New School Mapping
When I was reviewing Esper Genesis, the 5e SRD d20 sci-fi game, I ran across a passage talking about roles that people in a group could assume when travelling, and how assuming those roles meant they couldn’t use passive perception. I looked up in the Dungeons and Dragons 5th edition Player’s Handbook and realized that I had missed those roles in D&D the entire time I had been playing 5th edition.
Activities are navigate, draw a map, track, and forage. Not all of these always apply, but the way these roles are referenced does imply how those roles should be adjudicated in 5th edition D&D. Navigating is about making checks to see of the party gets lost when they go somewhere they haven’t been before. Drawing a map is about to record the group’s progress which “helps the characters get back on course if they get lost . . . no ability check is required.” In other words, the implication is if someone is fulfilling the mapping role, in character, if the PCs get back to where they were previously, they can backtrack to places they have already been.
What’s interesting to me about this is that for the cost of someone not being able to use their passive perception score, PCs should probably be able to backtrack their way out of a dungeon unless there is some kind of mitigating circumstance or supernatural alteration to the terrain after they left. I’ll be honest, I know anyone can run their games the way they want to run them, but there have been so many times I kind of wanted “permission” to handwave PCs backtracking out of the dungeon (of course, if it’s taking them hours to get out, I’m still all for rolling for random encounters for things potentially jumping them while the backtrack–I just don’t want to ask them about every intersection and multiple set of doorways on the way out to make sure they don’t wander around in the dungeon forever . . . in real time). 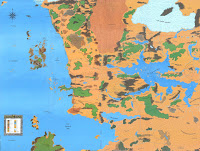 Setting Maps and the Stories They Tell
When it comes to maps that I personally really love–part of my image of the Forgotten Realms is the map of northern Faerun that came with the Old Grey Boxed set. I loved that map, both the smaller scale heartlands version and the zoomed out larger scale map. I also loved the functionality of the map just being a map, but with a plastic overlay to make it easier to apply game rules for travel based on the distances.
When it comes to maps and the Forgotten Realms–something major happened to the Realms in 3rd edition that was never explained in setting, but I think it had a more dramatic effect on the setting than people realize. The designers condensed the map of Faerun by about a third. This was done because they felt that it was a waste to develop parts of the setting that the PCs might never travel to in a campaign, so everything should be within reasonable travel distance to the heartlands.
I disagree with this logic, but beyond assuming that every adventurer should go to every place in the Realms to make developing different areas worthwhile, it also had the effect of making it feel like there was less unexplored in the setting. Traveling from Cormyr to Waterdeep was by no means rare, but it took time and effort on the old map. The entire reason the Zhentarim establish their trade route through the very dangerous Anauroch desert was because the straight line shaved weeks off of the long trip down and around the middle of the Heartlands and over and back up to the Sword Coast North. Less detailed nations were completely removed from the new map because of where “constrictions” happened. It was faster to get from one side of Faerun to another, and all of those spaces that might have uncharted settlements, inns, and ruins were cut down.
While Faerun is still much larger than I think most people visualize, and still has a lot of room for uncharted areas, the effect of making all of the major settlements closer to one another made stopping in those “unnamed” places less important, and reinforced the perception that every road was well traveled and well documented.
One of my favorite approaches to maps in fantasy products lately has been the maps in the Shadow of the Demon Lord products. Not only are many of these maps less about detail and more about the impression and relative locations of locations on a map, but many of them do not have a scale. While some fans are bothered by this and have been spending a lot of time trying to create a scale for some of the maps, I loved looking at the maps of the Borderlands of Tear and thinking, “I want it to take about a week to reach that side of the map, about two weeks to reach the middle, and maybe a month to traverse the all the way to that side of it.”

Maps with a Really Big Scale
It has actually helped my enjoyment of some science fiction properties to get an idea what the region of space looks like, where the media takes place. As an example, the only thing I was really worried about when the Expanded Universe became Legends for Star Wars was that the galactic geography remained intact. I was less worried about the lineage of Mandalorian Houses than I was just knowing that there were Core systems, the Inner Rim where the Core worlds expanded first, a Mid Rim that is kind of the “working class” section of the galaxy, a lawless Outer Rim that has to make do without much help from the rest of the galaxy, and the Unknown Regions were all kinds of mysterious weird undocumented stuff can come from. To me, seeing that map of the galaxy helps me to understand what kind of stories to tell in the setting, more than knowing exactly how many Jedi Knights were alive during The Phantom Menace.
Even though I know the series writers didn’t have it as well developed as we do now, I understand the politics of Star Trek better now that I know what species lives in what quadrant of the galaxy, and it becomes more obvious who the neighbors are and where the buffer regions are, including who lives there. Maps can communicate and reinforce elements of a story in a powerful manner.
Except for Firefly. The map of a trinary star system designed to handwave not utilizing FTL in the setting makes my head hurt.