Love and Shipping in RPGs

Posted on 12/28/2018 by Jared Rascher 2 comments
Often times, I’ll end up being inspired by the podcasts I listen to, and today is no exception. I happened to be listening to one of the Whelmed Reprint episodes:

If you haven’t listened to Whelmed, and you have any interest in DC Comics characters, you should really take some time to check it out. While it is focused on analysis of the Young Justice animated series, it tackles a lot of DC Comics related subjects, and it’s a joy to listen to.

Today’s topic was shipping, and it actually made me think of a system to add an element of shipping to roleplaying games. By mechanizing how a relationship develops, it might actually even add tension to a player who is actively deciding what path their character’s relationship is taking.
Shipping Rules
If a character wants to see if a ship is realized, they can create between one and three possible ships between their character and another existing character.
For each potential ship, create a single word name for that ship, or a compound word for that ship. Each of these ships has five boxes.
In addition to the one to three ships that you create for the character, create one more track with five boxes, labeled “Relationship Revelations.” 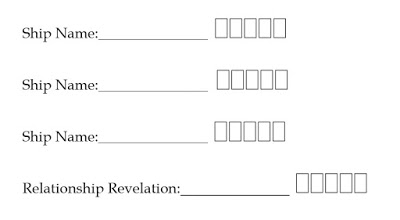 For PCs
You cannot create a ship with another PC unless that PC agrees. If that PC agrees, then this ship takes up one of their possible ships.
For NPCs
The game master must agree to any ships that you create with existing NPCs. If you create an NPC to ship your character with, the GM must be allowed to flesh out the details of the NPC after you create them.
No False Starts
No character can do anything to confirm a ship with a character on their possible shipping list. They can flirt, fall into one another’s arms, reveal deep secrets to one another, but they can’t declare their love or become an official couple before any of the tracks fill up.
This does not mean that the character cannot have a relationship with another character that they do not have on their ship list. The meta-conceit is that anyone that they have a relationship with before their boxes are full, and that isn’t on their ship list, is not going to be a long-term relationship, even if the character thinks it will be a long-term relationship.
Checkboxes
At the end of each session, ask the following questions for each ship that the character has:
If the player answers yes and supports that answer, add a check to one of the five checkboxes next to that ship.
At the end of each session, ask the following questions for the Relationship Revelations track:
If the player answers yes and supports that answer, add a check to one of the five checkboxes next to that track.
If All Ship Boxes Are Full
The player (or players, if another PC is involved in the ship) comes up with how their ship became an actual relationship, and they decide if they want to reveal it to the group.
If the Relationship Revelations Track is Full
When this track is full, the character decides something major that governs how they view all of their relationships. They may decide that they can’t get into a relationship with the person they love for some reason. They may decide that they have to prove themselves before they can move forward with their relationships.
At this time, the character sets a Relationship Resolution track. This also has five boxes. At the end of the session, ask the following questions:
If the answer is yes, and the answer is supported, check off a box. If the boxes are filled up, the character can resume whatever previous relationships they had put on hold.
The character does not mark any further boxes on any of their ships until the Relationship Resolution track is full.
Multiple Ships
If a character is a monogamous character, once their ship boxes are full, erase all marks in other ships. If the character is polyamorous, the relationships can continue to grow as per the above rules. The only exception to this is that if the full ship track is with a PC, that PC can choose to add that track to their own as well.
If one member of the ship has checked off all of their Relationship Revelation boxes, and the other one does not, their other ships still advance. If that character is monogamous and they erased all checks, they start over with new checks to see if they are being drawn away from their original ship while the original ship is working out their relationship concerns.
Why Mechanize Shipping?
Romance is a natural part of many stories, but many players have a hard time directly addressing romantic subplots with their own characters. By mechanizing the “rules” for relationships, a little bit of distance is put into the process, and may make it easier to engage in the narrative.
Despite that, I wanted to avoid any random die rolling. Sometimes characters start to gravitate towards having more meaningful exchanges naturally. A player can direct that purposefully, or it can develop naturally as the game goes on.
I also wanted to add some degree of variability without randomness. Characters may see themselves ending up with multiple characters, but not really sure which one will be the one they gravitate towards, or if they are even destined to be in a one on one relationship. This allows for some growth and change over time, instead of just creating a single linear path to romance.
The Relationship Revelation track is there to create additional tension that is often at play in a story, but is again, something that players may not think to add into their own narrative.
Feedback
These rules are meant to portray more melodramatic relationships that develop alongside other story arcs in whatever game system you might be playing. It may not be the B plot, but it won’t be the only A plot even if it is important.
I would be interested to see this in play, and additionally, I would gladly take any feedback if any of the topics I touched upon is less nuanced that it should be. I tried to keep it zoomed out to account for a wide variety of relationship possibilities.
Additionally, certain game systems will lend themselves to addressing these rules with more layers. For example, in Fate, achieving a ship might create a new shared aspect with a free invoke, and resolving a relationship resolution might change the name of that aspect and add an additional free invoke once attained.
Let me know what you think, and if you end up using these rules for any game system.