A Really Late Look at the Tomb of Annihilation

I recently read a comment on one of my blog posts where the commenter complained that I had to disclaim who I was at the beginning, because why does everything have to be about social justice all the time. So I guess I shouldn’t start this by saying that I’m a white male that has always lived with a certain amount of privilege, which means that I may not see every side of an issue from critical points of view that people in marginalized communities may, and that I hope people in those communities will feel free to point out where I have blind spots. Oops.
It’s been a while, and there have been two more adventures, as well as several official products, since the release of Tomb of Annihilation, but I’ve still got some thoughts on Chult, and how the setting was utilized. There are way better takes on this, so just as an example, you should read these articles:

I’m going to go into a little about my perspective back in the AD&D days, now, and what I really wished we would have seen.

What Would I Have Wanted (Which Isn’t the Most Pressing Question)
First and foremost, what I wanted out of this adventure is nowhere near as important as what people who have missed out on representation would have wanted. And I would have to say that the thing I would have wanted most was for WOTC to have had any people of color working on this adventure. It did come out after the adventure was released that, no, there were not any people of color working on this, even as freelancers.
This is a huge problem for the company that is publishing the most widely known RPG in the industry. In a time of unparalleled growth and visibility, a product that is set in a region of the setting with people of color, had no people of color working on the product.
The other glaring issue from the start is that the adventure assumes that you aren’t “from” Chult. People are getting tired of the Sword Coast? Hey, let’s have them make people from the Sword Coast that go visit an “exotic” land.
The real problem, in retrospect, is that this adventure was probably always going to disappoint me. The design priorities were “Tomb of Horrors-esque” first, setting way down the line. I really wanted something that was built from the ground up as showcasing Chult.
I would have loved something that played with the old lore in more consistent ways. Maybe Ras Nsi drove out the Amnians, and has done some good by doing a lot of bad behind the scenes. Opposing Ras Nsi then becomes a little bit of a moral quandary, because it might hurt Chult in the short term.
Let the PCs find out that Ras Nsi has been keeping Mezro from materializing on the prime material plane to keep them from interfering with his plans, and also reveal that some other force has been playing to Ras Nsi’s biases, and may be an even greater evil. Give Ras Nsi a chance to redeem himself and rejoin the Barae of Mezro to fight this greater evil, as Mezro is brought back to Chult.
In this case, you could still have your reframed Tomb of Horrors with Acererak as an outsider tricking Ras Nsi as the end point of the campaign, but with fewer mini-dungeons, ruins, and random wandering.
And the most important part of all of this–make it really clear that the default PCs are assumed to be from Chult. This isn’t outsiders coming in and saving the place, this is about local adventurers doing what they need to do.
I’m not even sure you need the Death Curse to hang over all the Realms. Beyond the fact that you have a lich from outside the setting using an artifact and a godling to trump how the entire cosmology and afterlife works in the setting, using the Death Curse as the reason things need to be fixed in Chult sends a different message than the other adventures. If the Sword Coast is in danger, it’s worth doing the work to save it. If Chult is in danger, the rest of the Realms have to also be in danger to make it worth showing up.
Additionally, having native characters changes one element that I saw repeated over and over again at various Adventurers League tables. Because PCs are outsiders, and because the adventures called out the adverse conditions in the jungle, people constantly referred to Chult as this terrible hell hole where no one should live. That is not the narrative you want to reinforce in the only setting that is primarily populated by people of color in the official products you have published so far. 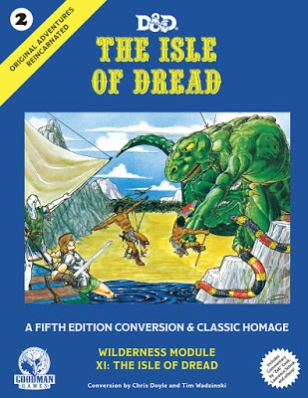 Credit Where Credit is Due
I am not saying that people should not enjoy Tomb of Annihilation. I do hope that people will examine and take care when they present the people of Chult when they run the adventure. I am sure that many people were attracted to the adventure as a full campaign based around the Tomb of Horrors, and others wanted a jungle hexcrawl, and like the designers, they are thinking of those elements primarily.
The adventure, as written, has some great moments. I would list them, but I’m also biased and many of them would include the word dinosaur. The death curse is even an interesting plot element, though it’s applied a little too broadly, quickly, and punishingly to allow some of the elements of the adventure as written to flourish.
I also don’t want to make it appear that I think WOTC has done a terrible job with inclusivity. WOTC has had some missteps and some garbled ways of expressing it from time to time, but I’m not going to claim that hasn’t happened to me either. I’m glad that they are trying, and I hope that they listen when people point out where they could do better.
We aren’t getting the sheer volume of sexist images, and we have a lot more people of color represented in the artwork of the books as well. WOTC as an organization has make several gestures towards marginalized communities that just a few years ago, very few in the RPG industry had done, and not with as much weight as the industry leader brings with it. Tomb of Annihilation presented a same-sex married couple, and Waterdeep, in the most recent products, is depicted as a progressive society in regard to many social issues.
I also want to make it clear that this didn’t seem, to me, to be the tone-deaf series of issues that plagued Goodman Game’s modern rework of the Isle of Dread. Unlike that product, which seemed oblivious that problematic content could even exist in RPG material, Tomb of Annihilation tries in some places, and fails in others, but at least seems aware that it’s not okay to write adventures like it’s still the 1980s and every gamer looks exactly like you. Of course, WOTC still approved that product, so there is plenty of blame to share in that case.
When mistakes are made, and when marginalized voices speak, it is still very important to listen to them, and to do better. And one of the best ways to do better is to actually hire them to work on your product.
I’m Probably Wrong
When I laid out what I would have liked to have seen, I’m sure some of the expectations I laid out are still filtered through the lens of someone that had privilege in the gaming space for decades. I have blind spots. Please feel free to point them out to me. I want to learn.
I haven’t written a standard review of Tomb of Annihilation, because I know that I had a lot of expectations that drowned out a more detached analysis of the content of the book. Having played through sections of it in Adventurers League play, I’ve got opinions, but I also know that a lot of people enjoy it on its face as an adventure, setting concerns aside.
So, let me know what I got wrong, and if you are someone who has always had representation in the RPG industry, maybe spend a few moments thinking about why the depiction of marginalized cultures may not the last thing you think about when evaluating a product.