What Do I Know About Reviews? Storm King’s Barrows (Dungeon Masters Guild Product) 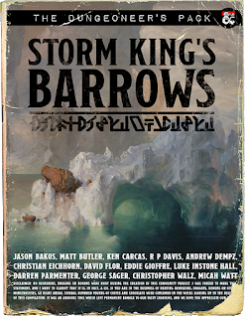 Despite having some issues with the order of the events and the endgame, Storm King’s Thunder is one of my favorite 5th edition D&D adventures and the one that I’ve managed to run from beginning to end. Because I have a certain fondness for the adventure, Storm King’s Barrows: Tombs and Crypts of the North caught my attention.
This is an anthology collection of short adventures, generally set in the North, that can be dropped into a Storm King’s Thunder campaign, or, more broadly, any campaign where the adventures happen to fit. You can find it on the Dungeon Masters Guild.
Cryptic Layout
The product is 135-page PDF, including a one-page index, a four-page introduction for all of the authors, and several pages of maps detailing the various locations. Stat blocks all are all laid out in a similar format to the official 5e books, and headers for various sections are similar as well.
Breve Heeros Onli!
The first adventure isn’t deeply tied too deeply to the plot of Storm King’s Thunder, it just requires a mountain and some adventurers willing to travel off the beaten path. The adventure takes place inside Mount Black and is essentially a hustle being run by a kobold who is scamming adventurers, guiding them through monster lairs so they can gather treasure, but actually working with a dragon to gather victims.

There is an example lair that Heep can guide the PCs through, and depending on the monsters encountered and the interactions with them, the PCs may get a clue of what’s going on. What I like about this is that the lair serves as an example, but Mount Black is set up as a dungeon ecosystem that might have several such lairs, so it can be reused and a DM could plug in lairs from other products into the tunnels. To some extent, the degree to which this adventure works is going to depend on how much your PCs will trust a kobold pitching a low risk, high reward dungeon, but if it works, it feels like it could be a lot of fun.

Like Loading...
tagged with Dungeon Masters Guild, Dungeons and Dragons 5th Edition Reviews, What Do I Know About Reviews