Recommendations for the 5e Realms Enthusiast 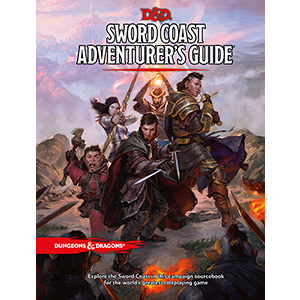 I’ve got weird mixed feelings on the Forgotten Realms as presented in 5th edition material. On one hand, I’m thrilled, because there are a lot of deep cuts and overall, the handling of the Forgotten Realms feels more respectful than at least the earliest 4th edition Dungeons and Dragons material. On the other hand, a lot of those deep cuts are also shallow treatments, and as much work goes into adding in classic D&D-isms not originally found in the Realms into the setting, and creating a core “D&D” experience that may not draw too deeply on highlighting what makes the Realms different from other settings like Greyhawk or Mystara, for example.

That got me thinking about what previous edition products I would recommend someone pick up if they wanted to get a better idea of more Forgotten Realms specific products that had more elements that were concerned with presenting the experience of the setting before the experience of D&D, as a whole.

These aren’t my top Forgotten Realms recommendations, in general. These are my top recommendation to provide more context to the setting, when looking at the Forgotten Realms material that has been released for 5th edition D&D. That means that this list is heavily weighted towards the Sword Coast, Amn, and Chult, as opposed to just a recommendation of previous edition products that encapsulate the Realms feel, in general. Maybe I’ll do that one eventually, but right now, I’m just thinking of providing context and bridging gaps.

There are also a few products on this list that provide context and allow for a deeper exploration of various regions and Realms specific themes, but may be problematic as well, and I’ll try to point out that as best as I can.

For all of the sourcebooks, adventures, novels, and comics I have read in the setting over the years, my current mindset is that only what is presented in the 5e material, right now, is “canon.” Everything else exists as stories, legends, myths, or sage’s conjecture, pieced together from a million sources with varying degrees of veracity. The point, for me, is to get an idea of the kinds of things that happen in the setting, and the way they unfold, not to create a definitive checklist of Things That Must Have Happened. Its all in service to what is happening at the table now.

That’s why, as much as I wish there were more Realms “flavor” to what is coming out, I am a big fan of presenting the major events in the setting as adventures that PCs can participate in, so that unfolding story of the Realms is one that is assumed to be resolved by players portraying unique characters, not a history of named and well-detailed characters that you aren’t playing yourself.

Hopefully, this is a useful list for anyone that doesn’t quite “get” what might make the setting special, and if not, maybe it’s at least some context for why I can never quite quit the setting, even when I actively try.