What Do I Know About My Campaign? Tales of the Old Margreve Campaign Journal #6

This week is super hectic, with my regular game nights coming up, as well as a convention/game day on Saturday, and work is really busy. Regardless, I still wanted to make sure and wrap up my summary of The Honey Queen before we started the next adventure in the Tales of the Old Margreve anthology commentary.
Previous Journals:
Campaign Journal #1
Campaign Journal #2
Campaign Journal #3
Campaign Journal #4
Campaign Journal #5
When Last We Left Our Heroes
Because of the way last session played out, I was trying to be cagier about what the gearforged warlord might be doing, because the group had been recruited by his relations, the Greymark family in Zobeck, and because, well, they just ran into a storm boar, and they like to eat metal.
Unfortunately, our gearforged warlord still couldn’t make it, so our dramatis personae for this adventure remains:
They were currently being guided through the field of hallucinogenic flowers by Fraulene, an alseid (deer centaur) who they saved from a rampaging ogre. There is a storm boar, a monstrous boar that’s green and charged with electricity, facing them down in a field.
I Love Storm Boars
Have you ever had a monster or a villain that got locked down by PCs because they surround them, and they can’t move well, and they have to focus on one PC to get out of the way, and then they get hammered with opportunity attacks once everyone surrounds them?
Storm Boars can turn into lightning to charge and push adjacent people out of the way. They also have a jumping attack. This is one mobile electrical swine. Both the jump and the lightning are recharge abilities, and the jump recharged, so that went off twice.
The lightning charge was the scariest power for the PCs, and thankfully (especially since their warlord wasn’t present), Fraulene got two separate critical hits with her bow, in addition to what the party did to Porcine Thunder. Also, Hrothgardt unleased the scroll of Legion of Rabid Squirrels during the fight. It may not have had much impact, but there were, in fact, rabid squirrels in the fight.
Into the Hive
Fraulene led the party to the cave system where the Queen’s hive is located, and took her leave, stuffing a few of the hallucinogenic flowers in her pack for when she was safely home. The party ran into the huge bear guardian of the cave.
Baba Migori drops a hint that the bear leaves if you mention Lyla’s name. One of the players wrote that down in her notes. Another player read the reminder in my blog. They still almost forgot the clue. Remember, you can never predict how easy it is to solve a puzzle in an RPG scenario.
Having avoided the bear fight, the PCs start their journey into the hive, which is lit by honey lamps that have their own internal glow. This place is already tempting our three bearfolk.
Lyla’s face, made of a swarm of bees, shows up to talk to them. Hrothgardt is pretty blunt with Lyla, tells her she’s a little girl that’s trapped in a dream. The bee face doesn’t seem to want to process this, and tells them they aren’t welcome in the caves and they should turn back.
Sticky Situation
The PCs find a body trapped in layers of wax in the wall, which I tried to express as a clue to look for layers of wax that might be used as traps or to hold objects. Due to poor rolls, the PCs didn’t notice that the wax layers are also built up on the floor, so they didn’t notice the sticky honey pit with the thin layer of wax, and they get trapped in one of the honey pits.
Two giant bees attack while Isobel and Hrothgardt are trapped in the honey. Isobel makes a strength check to pull herself out, but Hrothgardt’s player asks if he could make a con check to eat enough of the honey to escape, and actually, that sounds logical for this group, so I said okay.
Scarlett and Gurralt are busy with the bees, and Scarlett lets loose a Thunderwave to hit both of them. This doesn’t take them out, but I ruled that the very loud noise would be enough to chain another encounter. Most of the bees aren’t super bright in the complex, which left the mite Duxt or another Lyla bee swarm. I opted for Lyla.
Between the two giant bees, and the Lyla swarm, the fight was a bit more challenging than I was originally anticipating, but the group won out, especially once everyone had pulled free of the honey pit.
Dungeon Crawling
The party avoided a few of the side caves where there were more bee swarms lurking, and they knew what to look for when it came to the wax-covered honey pits. Near one pit, in particular, they ran into Duxt, the mite.

The encounter calls for Duxt to order the giant bee with him to attack until another giant bee can join the fight. I was inspired to have Duxt ridding the giant bee, and as soon as I had him riding the giant bee, I couldn’t help but portray him as a knight in service of the Honey Queen, but a really bad knight.

Duxt demanded to know why the PCs were in the corridors, and threatened them, and then when they recounted everything else they had just survived, they attempted to intimidate Duxt. Duxt decided that maybe he should strategically fall back to get a better idea of the defenses of the rest of the hive, meaning he ran for the queen, and the PCs followed him right to her.
Duxt then immediately tried to cover up running from the PCs by announcing them as visitors. 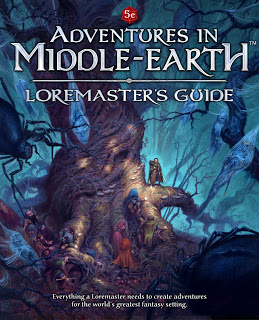 The Audience
As written, if the PCs don’t threaten the queen, they can attempt to change her initial attitude, and if she is moved to indifferent or friendly then they can get more out of her. In this case, the Honey Queen is a queen, of sorts, so I decided to use the audience rules from Adventures in Middle-earth, which I like a little more than rolling a few dice until she is either super hostile or super friendly.
The way the audience works, in shorthand, is one PC makes an introduction. If this goes well, the NPCs attitude changes one step to the positive.
Each character has to describe what they do during the audience, since it’s not a quick interaction. What each PC does can cause them to get a bonus or penalty to the final roll for the audience.
In this case, anything that was hostile, threatening, rude, or demanding would get a negative. Anything that was formal or businesslike wouldn’t do anything one way or the other, and anything that was specifically complimentary of the specifics of the Queen’s hive and operations would generate a bonus.
In the initial encounter, it mentions that rudeness or threats end the negotiation immediately.
In this case, the PCs made a decent enough introduction between Isobel and Scarlett. Everyone was fairly deferential to the queen, except for Scarlett, who name-dropped Baba Yaga. While this could have been seen as a threat, I felt like the nature of the mission and the fact that her patron is Baba Yaga meant that this was an exception. Hrothgardt, who is very focused on freeing Lyla, is super blunt, and imposes a negative.
The way most audiences are structured, if you meet the DC, you get a thing for which you petition the NPC. If you beat the number by 5 or 10, you may get more than you initially asked for. In this case, if they met the DC, they could get either the honey or Lyla, but not both. If they beat the DC by 5 or more, she would be willing to part with both for the same price.
They were successful in their bargain, but the party was resolved to get Lyla out if they could only get one thing. Scarlett briefly thought about parting with her token from the Bear King, but that would make the next trip they take on the Shadow Road . . . interesting.
In the end, they decided that the Greymark family would just have to be upset with them for failing the negotiation.
The Road Home
Without a guide, the party had to navigate their way out of the glen with the hallucinogenic flowers. Scarlett and Isobel failed their saves. Scarlett suddenly realized she wasn’t wearing pants, and that they were hiding behind party members and taunting her. Isobel saw the trees uproot themselves and act as an honor guard wherever the party went.
The group ran into Baba Migori again. She asked to take Lyla under her wing, now that her family is gone, and intimated that she may have been her sister when Lyla was much younger and before she fell into the honey induced sleep. The group is a little wary, but the potential familial connection made them more comfortable.
They planned a bit about what to say to the Greymark representative when they returned home, but I didn’t play that out too far, because I want to see if our gearforged will get in on this potential family grudge that is building.
Lessons Learned
The main takeaways I had this session were the following:
That’s all I’ve got this time around. Next time, we’ll be diving into The Vengeful Heart, which is a little bit less whimsical in tone.