An Embarrassment of Abstract Riches

I remember the first time I came across the idea of “abstract” wealth in an RPG. It was in Marvel Super Heroes, where characters didn’t have a set number of dollars in their bank account, but a rating on their wealth, like it was a superpower or a trait. When I was young, it never really struck me that characters like Tony Stark really did utilize wealth like a superpower, and I didn’t like the concept.

Here I am decades later, and really, wealth should be abstract in just about every game. The mechanism for abstracting wealth can vary to be in line with the other aspects of the game, but honestly, nobody gains anything by tracking copper pieces or decicreds.

I’m not going to try and come up with specific rules for any one RPG system, I’m just summarizing some thoughts I’ve had about wealth in games and how that has synergized with the media I’ve watched over the years.
Yes/No
To some extent, having enough wealth to survive really should be a “yes/no” switch. In other words, however granular your wealth tracking system is, there should be a threshold at which you aren’t scrambling to buy food and common supplies.
That’s not to say there shouldn’t be a state in the game where your character only has what they are carrying, and nothing liquid enough to help them get by. It does mean that unless the genre really leans into playing in this space, “Enough to Get By” is probably the default, and “Destitute” is what happens when your players have hit a particularly rough spot.
“Enough to Get By” is the space where if they want something substantial, but not extravagant, they probably have to make some kind of check, or else slip into “Destitute.”
While there were no checks involved, I toyed with this a little in my 7th Sea 2nd Edition games. For a while, I was charging my PCs a point of wealth when they wanted to do anything, and wealth is very fluid in that game. However, there came a point where I was ruling that if they just wanted to stay in the common room, get a meal and drinks just for themselves, if they had at least 1 Wealth, they had enough to pay for all of that without expending it. On the other hand, if they wanted a new pistol and went to 0 wealth, then it’s time to start looking at your skill list to see where you can scrape together some funds.

The Mongoose d20 Conan game had a rule that cited that half of whatever your character didn’t spend by the end of a session, once time passed and the next adventure started, your character lost. It’s a pretty solid reinforcement of genre tropes from Howard’s Conan and Lieber’s Fafhrd and the Gray Mouser. They can be flush with cash one moment, and be severely in need of assets by the time the next story starts (In Conan’s case, it’s a bit harder to draw a straight line between adventures, but even once he has a kingdom, he’s kind of lost half of it the next time around).
When we start looking at real, specific numbers, it gets harder to imagine that in a world where 10,000 gold pieces always have a stable value, you can lose 5,000 gold pieces just from partying really hard. But that’s playing by the really weird rules of D&D, where kingdoms deal in sums of gold pieces similar to the numbers of dollars that real-world nations have in their bank accounts.
I’ve never thought the solution was to create a more “realistic” means of tracking inflation in different regions. The real solution is that “mounds of treasure” really shouldn’t be counted. Hit points don’t represent exact wounds. XP doesn’t represent specific lessons in life. Gold pieces representing actual gold pieces is a huge disconnect, especially at higher levels.
When your heroes can carouse and win a fortune in rare spices, represented by a deed to the goods in the cargo hold of a ship, then get too distracted to take possession of that cargo and sell it, only to find out that smugglers have made off with the spices, who then lost the spices to pirates—all of that loss due to carousing makes more sense than spending 5,000 gold pieces on really expensive drinks. Even if they have umbrellas in them. 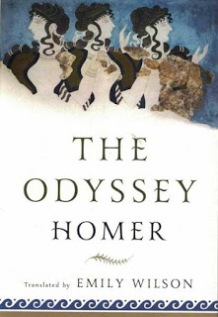 What Is Treasure Good For?
The next set of ideas on treasure and how it is utilized comes from recently reading Emily Wilson’s translation of The Odyssey. Treasure comes up several times in the story, but not in a manner where Odysseus is paying X amount for a sword or Y amount for armor.
In the mythic, heroic sense, treasure is about standing. If you are a capital “H” Hero, you need treasure for the following:
If you killed the biggest, baddest monster in the world, but you only maintained a relatively minor hold, people might assume you are an able warrior that likes to talk a good game, no matter how honest you are about your exploits.
If you don’t have enough treasure on hand to give obscene gifts to traveling bards, nobles, or adventurers, people will start thinking that your estate is barely holding on. If you don’t have enough to pay your retainers well, you may need to either let them look for greener pastures, or turn into a rather unheroic tyrant to keep them in their place.
In some sense, you could liken this to the old AD&D concept of paying for training, except that with gold pieces being literal, that always feels a bit strange. If a common laborer is lucky to see 10 gold pieces, what is your trainer doing with the 500 gold pieces you are paying them to practice with them for a few weeks?

On the other hand, from a mythic standpoint, what if you can only exceed how the world perceives you by just so much? Maybe you can’t move to the next tier (to use more recent D&D terminology) unless you have managed to spread your fame around. Even if you don’t have an estate that shows off how important you are, maybe you need to spread your fame by bringing back a legendary lost treasure for a king or high priest before you can start taking “epic” levels.

In other words, in a lot of mythic stories, treasure wasn’t about the individual things you could buy, but about the broader spending trends you could affect once you had secured a given level of wealth. Additionally, “things” secured with wealth are things that exist to be “campaign losses” when the PCs don’t manage to conclude an adventure successfully. Piss off the god of the seas and don’t make it home for years on end? Well, you lost the treasure “buffer” you had to maintain your household because a bunch of people moved into your house and started eating you out of house and home.
Further Gamification
Without going into details for specific game systems, one way to move from a more granular to a more abstract wealth system would be to follow the following steps.
The big caveat to all of this—this all is only worth the effort if you are playing a game where getting wealth is part of the genre. Even then, tailor the concepts of holdings and fame to the player characters. Conan wanted to see if he could get a handle on this whole royalty thing, but Fafhrd and the Gray Mouser just wanted to own a few ships and be able to settle down on Rime Isle.
Some Abstract Treasures
There are a few RPGs out there now that handle wealth in abstract manners, if not in the exact way that I detailed above.

By no means is any of this meant to be an exhaustive list of games that use abstract wealth, they are just games that sit at the intersection of “wealth might matter in this game,” and “we don’t want to track the individual pennies.” Plus they were near me on the shelves so I had the visual reminders.
While this isn’t ALL about D&D, it’s hard not to talk about wealth in RPGs and not think about not only the first, but one of the primary examples of a game where gaining wealth is often seen as character motivation. I’ve said before that even without fully abstracting wealth, I would love to see “wealth” as a unit of measure instead of literal “gold pieces,” and ratings for things like “bulky,” “standard,” “light,” or “negligible” wealth in the game.
A heavy statue might be a “bulky” reword worth 10 wealth, while a sack of coins might be a “standard” treasure worth 10 wealth, a handful of gems might be “light” wealth worth 10 wealth, and a letter of trade with a major merchant house might be a “negligible” treasure worth 10 wealth, as an example.
Regardless, it’s worth looking at what wealth is used for in your game, what it represents, why people want it, how they lose it, and how best to mechanize it.
Thanking the Cattle Prods
I’ve had the notes for this article saved for weeks now, ever since I finished up my reading of Wilson’s version of The Odyssey, but I never finished translating notes into a post. Brett and Sean, the fine hosts of Gaming and BS, just happened to touch on this same topic, which finally prodded me to finish this up.

Now if I could just revisit that idea I had for converting Edge of the Empire away from credits to completely relying on Negotiation checks and Obligation . . .