What Do I Know About Reviews? Animal Sidekicks (Dungeons and Dragons 5th Edition) 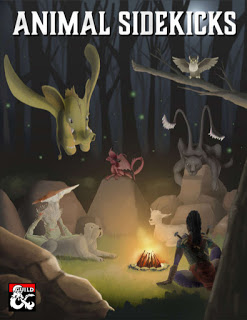 The Dungeons and Dragons Essentials Kit introduces a new concept to the game in the form of Sidekick rules. In the boxed set, Sidekicks had three base stat blocks, one for Expert, Spellcaster, and Warrior. The boxed set also gave details on how to level these characters up to 6th level.
The product I’m looking at today from the Dungeon Master’s Guild is called Animal Sidekicks, and it expands the options for Sidekicks using the same concept that the Essentials Kit introduced.
The Recruitment Board
The PDF for Animal Sidekicks is 44 pages long. The headings and table formats are all in similar style to the standard D&D rulebooks, and the book itself has all full-color artwork, with many pieces reused from the available DM’s Guild resources. Individual pages have a stat block, a table for leveling up the sidekick introduced, and another table that might be used for alternate species or personality traits.
There is a Table of Contents and a single page introduction, and the remainder of the pages are all different Animal Sidekicks.
Contents
The introduction explains the concept of the Sidekick and repeats much of the same information in the introduction for Sidekicks in the Essentials Kit. There is an additional section explaining size changes for some Sidekicks, as well as Languages. The default assumption is that most Sidekicks understand common well enough to take direction, but there is a short set of rules and a table to adjudicate an optional system for giving detailed instructions via Wisdom (Animal Handling) checks.
The final section of the introduction mentions Quirks and Personality Traits, and while many of the Sidekicks introduced in this product have tables for Quirks and Personalities, it’s not universally applied. As mentioned above, some animals have alternate “class” features or stat block differences to differentiate species of animal instead of Quirks or Personality Traits.
Bring On the Sidekicks
The rest of the product is all new Sidekicks. While the name of the product is Animal Sidekicks, there are a few monsters that aren’t quite “animals” in the mix. Most of the stat blocks align in a similar manner to the Expert or Warrior stat blocks, since even the more magical creatures don’t get a full spellcasting progression.
While most of the creatures are on par with the Essentials Kit stat blocks, there are a few that start off a little weaker physically, such as the cat, which starts off tiny and stays that way (it’s a scary glass cannon with its dex based damage, however).
The Sidekicks introduced in the product include the following:
Many of the higher level abilities involved adding a second attack, which is similar to the Sidekicks presented in the Essentials Kit, although some, like the constrictor snake, gain special abilities like a swallow ability added on to an existing attack.

While all of the stat blocks, in general, look pretty solidly in line with the initial Sidekicks stat blocks, and many of the special abilities trigger at points where the Essentials Kit versions gain similar abilities, there are a few things I wish could have been standardized across different Sidekicks.

For example, as written, the goose doesn’t have a size limitation to it’s ability to knock foes prone, but the steeder does. The boar can eventually grow to large size, but other animals that have a giant and “regular” version, like goats and owls, get separate stat blocks for the different versions (with the large sized usually getting more aggressively combat oriented abilities, and the smaller version getting more “tricksy” abilities, like the goat’s faint or rapid leap versus the giant goat’s crazy eyes or death bleat abilities).

Many of these animals that do shift size do so around 5thlevel, meaning for medium sized PCs, that’s around the time they could be used for mounts. However, there are a few that have their growth spurt or equivalent ability earlier than 5th level, and a few that get it later than 5thlevel. While it’s logical that it doesn’t happen, given the “wyrmling” designation, that means there aren’t any ridable dragons for your PCs among these Sidekicks, at least if your PCs are medium.

It is interesting to see the griffon adapted to these rules, but not some other staple magical mounts. It was also a surprising choice to see the default mastiff progression presenting it as a mount for small characters, with a sidebar on modifying the stat block and progression for other types of dogs.
Most of the creatures have strongly thematic elements added to them, although a few make for choices I didn’t expect. The crocodile gets the ability to support Charisma checks with an ability called Crocodile Tears, which, other than the name, I have no idea how that works. On the other hand, cats and tressym get a bard like ability to boost healing on a short rest because of their ability to purr, which I love.

I wanted to specifically mention sea horses, because if you are trying to picture what kind of helpful abilities a real world sea horse would contribute to an adventuring company, I wouldn’t worry about it. This is the most fancifully removed from it’s base animal type in the product. Picture a sea horse that literally came from The Little Mermaid, and you would have a better idea of it’s abilities. And the names of it’s abilities, for that matter.

It is also worth noting that even if the base creature is a monstrosity with an alignment listed in the Monster Manual, none of these stat blocks have alignments, and are assumed to be workable companions to whatever adventurers they travel with. I appreciate that flexibility.

I really liked the concept of Sidekicks from the Essentials Kit, so I’m happy to see an expansion to those rules. There is a great variety of Sidekicks presented, that can fit a wide range of fantasy tropes (the special mount, the faithful dog, the wise bird that acts as a scout for the adventurers), and making them Sidekicks means that they don’t need to be slotted into the structure of a subclass to work. Some of the stat blocks are functional alternatives to the basic Sidekicks from the Essentials Kit, but there are several with clever thematic elements based on the animals themselves.

Overall, I felt as if the stat blocks and abilities compare fairly evenly with the Sidekicks from the Essentials Kit, but I wish that some of the creatures that had similar thematic elements were standardized against one another a little bit better. I will fully admit, I don’t know what the effects of having Sidekicks that can serve as mounts from level 1, and multiple others that can do so for small characters, does to the game, because, honestly, I haven’t seen many mounts performing pivotal functions in 5e games I have played in or run.

If you love the Sidekick rules, or you really want more scalable rules for things like mounts or hunting dogs that travel with the party over time, this is going to be a solid purchase for you. Even having a limit of 6thlevel is going to dramatically increase the survivability of companion animals in the group.

On the other hand, if you are running with even a “standard” size party, you may not want to do something that encourages a party to go from four to five turns to eight or ten. As it stands, the Sidekick rules may not be as robust as full player character classes, but they aren’t simple “boosts” to existing character actions either. So if you don’t already want those extra characters in your game, this product isn’t going to be the one to change your mind.

For me, personally, that really enjoys the concept of Sidekicks and wants to see what others do in that design space, I really hope that there are further products that can introduce the kinds of companions that a whole range of PCs might take with them, from constructs, to undead, to outer planar creatures, in this same, simplified format.

Like Loading...
tagged with Dungeon Masters Guild, Dungeons and Dragons 5th Edition Reviews, What Do I Know About Reviews