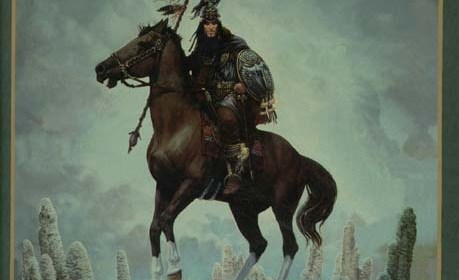 I picked up the original Forgotten Realms boxed set in 1987, when it first came out. I immediately transferred my game to the Forgotten Realms, by having my player’s characters find a portal from their “Kind of the Known World but With Too Many Real World Analogies Patched On” setting. Even when I was away from gaming for a few years, I was reading the novels to stay in touch with the world.

My second favorite D&D world is Dragonlance. When Eberron first appeared in 3.5, I wasn’t an early adopter. For whatever reason, it just didn’t appeal to me, and additionally, the core D&D books and the Forgotten Realms books were coming out so frequently that I couldn’t adopt a new setting at the time.

It’s only been in recent years that I’ve started to investigate and explore the setting. With all of that said, it may be a surprise to see me express the following opinion. Eberron should be the default setting of Dungeons and Dragons.

Why would I say that? Because I love Dungeons and Dragons dearly. I love the Realms dearly. But they both started with, and accumulated, a lot of baggage. I don’t mean to imply that Eberron is free from any problematic content, but I also think that it is clear that Eberron was designed with more intentionality when it comes to the genres and tropes being introduced.

I’ve talked about this before on the blog, but the inspirations for D&D come from many different places, and many times those individual sources have their own problems, but when the problems from multiple sources interact, they create unique issues that weren’t even present in the initial material.

Orcs are a mutated species created to serve a fallen god in his plans to subjugate the world. Let’s add orcs, but not the fact that they are a created species, and then add all of that to alignment, implying that a species that just develops, however they do, naturally alongside elves and humans and dwarves, can just be born evil, and it’s okay to mow them down.

Let’s add in the central conceit of Howard and Lieber’s stories, that people can just wander around as mercenary adventurers to make their fortune, but then bold on the assumption that most places in the world recognize the same conventions as feudal Europe, so that once these wandering sell-swords get enough power, they just get granted titles and land, and are assumed to be rightful rulers of whatever land they clear out, without really commenting on the validity of an entity to rule, which the source material actually did in various places.

Possibly the best example of adding things together and making something worse out of them is D&D concept of taking dark elves from Norse mythology, i.e. elves that live in dark caves, and dark elves from Tolkien, i.e. the elves that didn’t heed the call to the East when the Valar called them, then add alignment, in this case evil, AND THEN give them black skin.

I could go on, but problematic tropes in fantasy are like atoms missing an electron in a shell, they form bonds with one another to create new compounds that aren’t found in the original problematic material. This often, ironically, leads people to assume that the source material had the same problematic issues that D&D had, when they actually had different, but more easily discerned, problematic content.

I guess what I’m positing is that if you see the source material, and you don’t add in too many other elements, it makes it a lot easier to address the core problematic content. If you play a literal Hyperborea game with a Conan RPG, you can see, and more easily challenge the concept of Might Makes Right, because there aren’t three layers of rules built on top of the concept that also doesn’t acknowledge that Might Makes Right is a core concept that the game was built upon. If you play a game set in Middle-earth, with an RPG designed for the setting, it’s easier to see and address issues of “the divine right of kings” if that is something you want to do.

D&D has lost a lot of these rules-based trappings, but the negative image those old rules left on established settings remain. Alignment still exists, but has fewer rules interactions. The game itself has been moving away from everyone that gets to a certain level automatically becoming a ruler by virtue of how awesome they are. But settings were either built from scratch assuming these things, or were molded towards these assumptions to accommodate the game.

Eberron, however, was designed to be something unique. It’s fantasy. People use swords and magic. But it explicitly doesn’t follow the exact pattern of any real-world history, except in very broad strokes. Alignment was always “relative” in Eberron, and it’s a core assumption of the world that a lot of species assumed to be “monsters” in other worlds are just people with a different culture, and contribute just as much to the world. Orcs were the first druids. Goblins had the first real empire, which paid dearly to defeat the unknowable alien weirdness that had seeped into the world. Gods don’t show up to definitively make statements about the rightness or wrongness of things.

I have long said that the Forgotten Realms is more unique that people that are not fans often give it credit for being, but it is very easy to cast a cursory glance at the setting and see very obvious fantasy tropes that play to expectations. Part of what homogenizes the setting is the surface level read. When you port Acererak or the Elemental Cults from Greyhawk to the Realms, there isn’t really a surface level appearance that lets you know those things don’t normally belong in the setting. As they have been portrayed in Dungeons and Dragons material, the Forgotten Realms and Greyhawk share a visual language and a set of shared assumptions born from catering to the amalgamated nature of D&D itself. That amalgamated shorthand, itself, pulls greatly from fantasy like Lord of the Rings, inviting comparisons that may not be accurate, but are definitely implied. 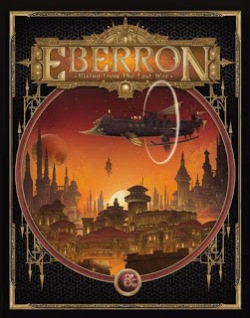 On the other hand, when you see a Warforged or a Changeling, the pseudo-scientific gadgets of an Artificer, the Lightning Rail, or an Airship of House Lyrander, you see a D&D setting that knows it has unique elements, and is presenting those elements as foundational. You can still travel to weird jungle ruins, but instead of rolling on a ton of charts for random encounters and determining if you want to play through four months of sea travel, you can have the PCs fly on an airship straight to Xen’drik.

This isn’t to say that Eberron isn’t an amalgamation of different elements. Eberron uses old 30s era pulp sensibilities, elements of traditional fantasy, westerns, and movie serials. The difference is, you can find discussions about what was included in Eberron, and why. You can find discussion on what different elements bring to the setting, and how they should be used. This isn’t the almost manic inclusion of every fantasy property’s tropes popular at the time, mixed with an unexamined bias from the miniatures wargames from which RPGs arose initially. There are a lot fewer accidental interactions in the setting, because it could be informed by decades of RPG hobby history and progression.

Eberron is a very clear, obvious brand for D&D. If you use old school elements of D&D in Eberron, they still work, but saying that Acererak has invaded from another dimension is going to feel much more momentous, because he doesn’t look like every other lich in the setting. Eberron lends itself to more intentional design choices, and forces creators to think about setting instead of assuming defaults built in to D&D for decades.

In the 4e era, I felt like WOTC wanted to keep the Realms, in some form, despite the massive reworking to fit the core setting assumptions of 4e, because WOTC felt that Drizzt was their main recognizable bit of marketing. Given that degree to which streaming shows that don’t even reference the Forgotten Realms have taken prominence, I don’t know that the centrality of the Realms is the best position for WOTC to take.

Look at the upcoming D&D movie, and the supposed leaked script. If that version of the story makes it on to the big screen, how different will that movie look than, for example, the Hobbit movies? How different will it look from the Warcraft movie?

Now, picture what you need to do to make a D&D movie about a D&D setting that is instantly recognizable if you use Eberron as your baseline. How many fantasy movies have feature magically animated artificial creatures fighting sky pirates on the deck of an airship, while the airship fights off a dragon, and the raiders are flying on individual sky sleds?

I don’t think Eberron requires anything from the core D&D rules to make it work, other than allowing the setting itself to introduce new species and setting assumptions, meaning that for people that want to create a more traditional setting, nothing in the core rules prevents that, but everything is provided for the baseline that Eberron would need to build on.

Greyhawk is very much a setting created by drawing a line between points established from playing out the amalgamated assumed setting. The Forgotten Realms is an adopted setting wearing a lot of layers of clothing that may not fit the setting as well as they initially appear. Eberron feels like something that was fully formed from D&D when D&D had a much better idea of what it was. For that reason alone, I honestly would love it if, going forward, into the future, Eberron became the baseline setting.

Nobody needs to be assumed to be a monster. Nobody needs to assume feudalism. Adventure can be flavored with some dose of realization that the current society isn’t the baseline for defining “civilization.” The setting doesn’t need to fight against the wonder introduced with the open-ended nature of the games magic to feel like something that doesn’t make sense in light of the ubiquity of magic.