Star Wars: Ouroboros, Some Thoughts on The Rise of Skywalker

As someone that enjoys running and playing roleplaying games, I understand the value of repeated stories. Even more so as someone that enjoys the challenge of running games in established settings and finding the right beats to make the story feel as if it belongs with the source material.

Warning: if you haven’t seen the movie yet, we’re going to be touching on quite a few spoilers in this piece.

I have mentioned before that I like cyclical stories. Evil is never permanently vanquished; every generation is going to face its own challenges. That said, it is often very important to examine the purpose of revisiting a cycle. Given the relatively low states of running a roleplaying game, the purpose can easily be to rekindle the feeling that the original cycle engendered in the participants, with the added benefit of firsthand participation.

So now we get to what has me ruminating on all of this. Star Wars–The Rise of Skywalker. I saw Star Wars for the first time when I was four years old. Star Wars has been part of my life for a long time. It has helped to shape who I am. I will preface anything I am about to say by saying that nothing in The Rise of Skywalker has changed that. The core themes of the cycle of the Star Wars mythos still resonate with me.

That said, I can’t help but feel as if this was a turn of the cycle that was told bigger, but not deeper. Too many elements that were reused were reused and magnified, but not more deeply explored. When Abrams was criticized for using too many elements from the previous trilogy in The Force Awakens, I was not concerned. This was the opening chapter of a trilogy, and the opening of a three-part story, in many ways, is the best part of the cycle to resemble previous cycles. 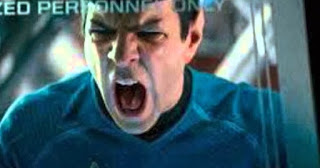 I Have A Bad Feeling About This

I shouldn’t be surprised at this. I wanted to tell myself that the mistakes that Abrams made in Star Trek Into Darkness were because he wasn’t as comfortable with the themes and elements present in Star Trek. The biggest mistakes that Abrams made in Into Darkness were to try and introduce elements that had appeared elsewhere in the Star Trek mythos (Khan, for example), and assume that those elements had enough weight that they did not need to be properly reestablished in the new version of the cycle.

Additionally, Kirk revisits the exact same story arc regarding his growth that he had in the first Kelvin timeline movie. He’s reckless and doesn’t play by the rules and needs to learn to balance that recklessness with reason and mature leadership skills. Again. Additionally, Abrams uses a story beat from the previous cycle, a character sacrificing themselves to save the Enterprise, and asks, “what if Kirk instead of Spock.” The problem is it’s an abrupt substitution that he doesn’t spend enough time earning. Too much of what is reused in Into Darkness has no weight to it, because Abrams is expecting the allusions to previous stories to do the work of establishing weight in the current story.

All these flaws are present in The Rise of Skywalker. Palpatine’s resurrection is abrupt and is expected to have weight simply because it is Palpatine. Palpatine can have a fleet ready in the Unknown Regions because he’s Palpatine, and hey, if you know the Expanded Universe, Palpatine just pulled a giant fleet including multiple super-weapons out of his nether regions in that story as well, so it could happen, right?

Side note–of all the Legends continuity elements I would have wished to have resurfaced in the Disney era, Dark Empire is the one I would have happily left in the Limbo of Stories Past.

Lando can recruit an armada almost instantaneously off-screen, because he’s Lando. Poe has the same kind of rakish charm that Han Solo did, so he can suddenly have a past as a smuggler that is suddenly important. There can be an off-screen stormtrooper uprising, because Finn left the First Order in The Force Awakens. Abrams continually uses the formula of “make a statement,” and then “extrapolate major plot point based on a statement previously made,” and it happens so often that the entire experience feels very thin.

I don’t like to rely on pedantic discourse on “what should happen” in a fantasy setting, but there is something to be said about playing with the spirit of what has been established versus abusing the notion that the world doesn’t expressly tell you what can and can’t happen. I’m not talking about the Force. Honestly, the Force is magic, and the biggest rule we’ve been told is that if you get yourself in the right mindset, you can do pretty much anything. But how the hell does hyperspace work, now?

Han expressly tells us that traveling through hyperspace ain’t like dusting crops in the first Star Wars movie ever. It’s not a hard and fast set of physics, but it is a statement that hyperspace isn’t something you can safely do on the fly, which is there to explain to us that you have to spend some time in danger before you can get away. It’s also a plot point in multiple movies that it’s hard to track a ship through hyperspace, which is why the Rebel fleet could even exist in the original trilogy, and why tracking ships through hyperspace was a major plot point of the previous movie. But, not unlike being able to use a transporter to travel between entire quadrants of the galaxy in Star Trek Into Darkness, Poe can use Han’s once in a lifetime hyperspace tricks repeatedly, and not only does he break all kinds of rules for how we thought hyperspace worked, but the First Order ships following him have no problem keeping up.

There are a lot of elements that do work in this film. I wasn’t feeling very engaged with the movie until Kylo Ren has his encounter with the memory of his father and returns to being Ben. That scene nearly had me in tears. Chewbacca’s anguish at Leia’s death was amazing. For a character that doesn’t utter lines in English, the pain of Chewie losing yet another old friend comes through very convincingly. The chemistry between Rey and Ben is amazing. All of that kept me invested, even as the other issues I had with the movie kept springing up.

One of my biggest disappointments was the Emperor. I have always loved Ian McDiarmid’s performances as Palpatine. This performance, however, felt as thin as the worst elements of the movie. I’m not blaming McDiarmid, so much as just realizing the Palpatine was not a character, he was a plot point. I was completely on board with Palpatine being the force behind Snoke and playing the REALLY long game and being the real villain. It made sense for the same personal that started a galactic war and manipulated both sides to be the same villain that was responsible for the First Order.

But, whatever your feelings about the prequels, Palpatine spend three movies “earning” what he got out of that game. He played the Trade Federation, manipulated a fallen Jedi, tricked a Jedi master into building him a clone army, and got himself invested with emergency powers. Even with the clumsy storytelling of the prequel trilogy, there was some weight and effort behind Palpatine’s rise to power. Like so many other elements of this movie, instead of even coming up with a little bit of pretext for how Palpatine could have orchestrated what he did in this movie, Abrams is hoping that past performance is enough weight to allow him to just state that Palpatine can play the mastermind card.

I Am Not A Committee

I would have had all these misgivings about the film if it had been a duology and Abrams was the only filmmaker involved. I felt too many of the same feelings that I felt with Star Trek Into Darkness to not know that I was just unhappy with the weight of facts being injected into the story. But I can’t fully leave this topic behind without being at least a bit concerned that some decisions in the movie may have been made expressly to appease some of the worst elements in Star Wars fandom.

Rose is given almost nothing to do, and I feel like this is a “diplomatic” move so that Lucasfilm can both say that she wasn’t removed from the movie for people that liked her character, and they can say that she wasn’t a major character, to appease the all important element that spent the last two years running Kelly Marie Tran off social media. Lucasfilm has Rey and Ben kiss, so they can keep the fans happy that see the natural chemistry between the characters, but then Ben dies, because there are a lot of bloodthirsty fans that believe redemption must be an act of blood sacrifice. Finn and Poe are both given women to flirt with, but also hang out with each other a lot, so Lucasfilm can say that fans that ship them, or want them to super-straight 100% of the time, can both be happy. And maybe it’s because I’ve read too many books and comics that already dealt with it, but Chewie getting a medal was such a pointless gesture considering everything else going on in the movie.

I’m a little torn of Rey as a Palpatine. I think it greatly undermines the point that Johnson was making in the previous film, but, mystery box aside, I honestly think that this particular choice was less about appeasement than it seems to be what Abrams wanted to do with the character from the start.

In the end though, it all feels really empty.

I’m very disappointed in The Rise of Skywalker, but I was also very entertained my aspects of the movie. It hasn’t ruined Star Wars for me overall. It has made me realize two things:

I am enjoying seeing other characters in the setting dealing with the themes and elements of the setting, without directly interacting with established singular characters, for example in Rogue One or The Mandalorian.

I don’t want to see anyone that directly appeared in the Prequels, Original Trilogy, or the Sequels again for a very long time. If the cycle isn’t going to get deeper, I don’t need to see it again.