What Do I Know About Product Lines? Conan, Adventures in an Age Undreamed Of RPG (With an Eye Towards Culture and Representation)

In light of the recent Modiphius Conan release and the reaction to it, I did a LOT of research into the Conan, Adventures in a Time Undreamed Of RPG line. In 2018 I picked up the package where all of the books get added as they are released. I had originally started breaking this down by individual release, but it  makes a lot more sense to visit the line in chunks.

I also wanted to say that this is the kind of mistake a lot of company’s make when they produce material for an intellectual property. I like some elements of the game. They nail the tone of the game, and the 2d20 system does a lot with turning the dials on the game currencies, and I’m currently running Star Trek Adventures, which uses the same core system, but manages a much different tone using the same base.

The biggest problem the line has is that it is VERY concerned with being true to Howard, and that translates badly to presenting a setting. While it isn’t good, it is a lot easier to forget some (definitely not all) of the racism in the story when it happens in framing a story.

It is 100% white privilege to do this, and it’s not good, but it’s too easy for a white man to read a Conan story, read about the racist framing of the culture Conan is visiting, and then lock that in the background once Conan takes center stage in the story.

However, when the sourcebook is about the setting, and you can’t suddenly have Conan occupy center stage, you are building on the details, and all of the details, in the background, are built on a structure of racism and dismissive reductivism.

One of the worst ideas that is baked right into the rules is that you might have an “Ancient Bloodline” that makes you more likely to take certain actions over others, and rewards/punishes you based on what that bloodline drives you towards.

The core book spends a lot of time mentioning that they are working with Howard scholars to do the setting justice, and they are primarily concerned about “getting it right.” There are few to no disclaimers about Howard and the world he presents, especially in the main book.

The closest we get to that is the section mentioning women in the setting, and how there are a lot of “damsels in distress,” but there are also women action heroes, so you can play the action hero women if you want.

Art-wise, the covers and the big chapter pieces are very much inspired by the Frazetta paradigm. Nearly naked people, women in passive poses, big powerful Conan. The interior art depicting things like PC archetypes are more varied and less sensationalized. Even at that, there are trends that tell a story, even if that wasn’t the intent. Black characters are almost always from “less civilized” archetypes. Even scholarly types from Stygia are always portrayed as more middle-eastern in presentation than black.

White presenting characters might be barbarians, knights, scholars, nobles, merchants, whatever. So even if there are tribes of white barbarians, they aren’t the only white representation. That’s not exactly true of the black characters presented. There are all kinds of references in the books that use terms like “this culture doesn’t mix blood with outsiders,” that just sounds awful. They use Howardian prose, in Howard’s style, at the worst possible time to do so.

Even before the Conan the Wanderer sourcebook came out, there is a jaw-dropping comment about Khitai in the Books of Skelos supplement:

“The Khitan mind is nearly as alien to the West as that of pre-human cultures.”

I have heard people mention that in the old West End days of Star Wars, a lot of alien cultures were extrapolated on what little we saw of a character, so you got cultures like Rodians all being hunters, because Greedo was. That’s what most of the cultures look like in Conan. If Conan ran into someone and thought they were debased and slothful, that’s how the books depict the culture that character came from.

This isn’t a defense, because there is a part of the core rulebook where they clearly outline the inspirations, but it’s almost like there is a disconnect between the racist and harmful stereotypes because these are fictitious cultures that never existed, based on actual historical cultures.

I think because a lot of cultural connection to Conan comes from visual representations in movies and comics, those mediums remove us from the same kind of framing that Howard’s stories provide. We see commoners affected by evil nobles, so we disassociate them and don’t get Howard’s narrative that the culture has certain intrinsic shortcomings. We see Conan associate with characters that are people of color, and we don’t get Howard’s framing that they are “the good ones.”

We certainly don’t ever hear Arnold or Jason Momoa saying that it would be better for white women to die than to be ravaged by black men. And yes, that’s something Conan said in a Howard story.

We do get a brief disclaimer at the beginning of Conan the Adventurer, the primary sourcebook on the Southern Lands, which includes what Howard imaginative named The Black Kingdoms. None of the Conan books include the same kind of “H.P. Lovecraft was racist” disclaimer that you see, either in soft or hard form, in most Lovecraft related material now. Possibly because instead of being in the public domain, Howard’s IP is managed by a media management company.

There is a framing device that could have been used to great effect in the line, in that most of the setting material is presented as historical records, written by different scholars in the Hyborean Age, discovered by a 1930s era historian.

The problem is, most of these historians, instead of giving a more nuanced view of the settings they are presenting, either reluctantly trash their own culture by saying all the worst things are true, or embody the worst aspects of their setting (like the narrator from Khitai).

The 1930s narrator that they present is taken from Howard’s mythos stories, so that it’s all tied in to his IP. The problem is, a 1930s perspective historian isn’t all that great at trying to give context to ancient era racist portrayals. There is a section in Conan the Mercenary that has the 1930s era historian criticizing the rise of nationalism, but then he kind of praises the virtue of mercenaries just fighting to make money and get by in a world that just can’t help but need killing done.

There are also a lot of uncomfortable archetypes presented for players, and without much in the way of safety discussions, that makes the inclusion of those archetypes a bit fraught. For example, in Conan the Barbarian, one of the player character archetypes is slaver. 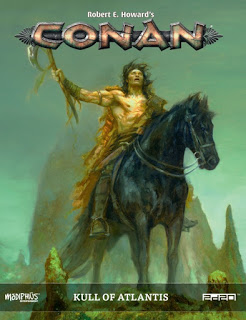 The biggest problem is that I don’t think Modiphius CAN add a lot to the setting that wasn’t expressed in some manner by Howard, and what was expressed by Howard has its basis in racist reduction and misunderstanding. Without being able to criticize and expand, it’s hard to escape.

I love how the momentum spends and skills work in the game to present the kind of visceral fantasy that Howard writes. There is a lot of good work in the books, especially in translating genre to game mechanics.

There are a few books in the line where Modiphius appears to have a little more breathing room. For example, there is way less cultural reductivism in the Kull of Atlantis sourcebook, because Howard didn’t detail the setting as much or draw as many direct lines. Conan the Exiles is a tie in product to an online game, which creates a separate region within the Hyborian Age were people from all over all exist, trying to survive, which allows for diversity of characters without inherent cultural coding provided by Howard.

I’d throw in that the Horrors of the Hyborian Age book is an interesting read as a general bestiary, although it’s got a lot of Howard’s propensity for throwing the word “black” in front of anything evil or dangerous. I mean, he does that A LOT.

Honestly, if I knew up front what the books would detail, and I just had to run a licensed Howard Conan game, I’d probably skip almost all of the setting based supplements, pick up the Kull and Exiles books, and do my best to avoid the worst depictions that Howard wove. While I still felt it was a bit too apologetic towards Burroughs, the John Carter of Mars RPG put out by Modiphius does a much better job of actually addressing some of the issues with that material, and instructing GMs to avoid the worst aspects of those stories.

The State of the Game

What I really wish we could get from this line is more direct criticism of Howard, and the ability to frame all of the setting information as “the stories came from one set of histories, but we’re presenting an alternate set of histories, with more context,” allowed to move beyond. But in all honestly, much like with John Carter, I kind of think it’s almost easier to just play in a setting LIKE the books, without some of the book’s baggage, that can rebuild the genre without including some of the setting’s worst aspects.

“Look at all these neat building blocks, but what’s this goo all over them?”


“Sorry, that’s intrinsic racism. If you use the building blocks, you have to use them how they

“Fine, I’ll just try to turn whatever I build so that you can’t see the puddle underneath.”