What Do I Know About Reviews? Legendary Bestiary, Legendary Actions for Low-Level Monsters (Dungeon Masters Guild) 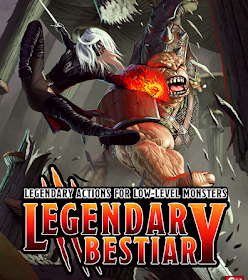 For a while I have been discussing how I would love to see more alternate monsters with slightly different traits for D&D 5e, or more monsters with legendary actions. I have also mentioned how I like the idea of that one really tough, singular beast that lives in the woods, a creature that doesn’t need to be overtly supernatural to still be a much tougher example of it’s kind.

It turns out, a product appeared on the Dungeon Masters Guild that addresses some of these concepts, The Legendary Bestiary. It’s a book focused on creating legendary actions for CR 1 through CR 3 creatures. I thought I’d take a look at it in today’s blog post.

The Monster Book of Monster . . . Actions

The PDF of the product is 35 pages, which includes an inside cover, a table of contents, and two pages dedicated to random tables for naming legendary creatures. The product has an eye-catching cover and title font, and makes good use of the DMs Guild art assets.

Individual monster images are accompanied by example titles, and a few of these also include a paragraph of description for various legendary monsters, all of which are monsters of a type detailed in the product itself. Font is very similar to D&D 5e standards, with a few variances from the typical headers, but the overall look is very polished.

The Belly of the Beast

The introduction states that the desired purpose of this book is to allow DMs to have a wider range of creatures available for climatic encounters, especially to create more circumstances where a single opponent can be a challenge for a party of adventurers. It mentions that this should be something you can do even for low-level adventurers, with situationally “legendary” creatures like bandit captains.

There are some notes on how the legendary actions included were designed not to move the monster away from its current “niche” in the game, and includes some quick ideas for boosting XP rewards when turning a standard creature into a legendary challenge. There is a little bit of wording under the bullet points for the design principals that feels like the sentence is incomplete, but overall, the introduction provides the thesis statement for the product.

Support abilities often grant movement, temporary hit points, or even extra attacks (sometimes with disadvantage, to represent the lower impact of these legendary actions). There are also a good number of “setup” abilities, legendary actions that allow a creature to gain advantage on a later attack, to do more damage, or potentially recharge an ability earlier.

In several cases, various animals are given abilities that are very much either thematic for the animal, or directly references hunting or defensive tactics for those animals. I appreciate this, because it feels like a lot of real-world animals get less design space to make them interesting than fantastic monsters, and that’s a shame. Bears can slam an opponent to the ground or scare them with a roar. Lions can bolster their pride with a roar. Eagles can snatch an opponent and fly up into the air with them. Several animals get the ability to use their senses to sniff out prey.

Another style of legendary action that makes several appearances in this product are “partial” uses of other abilities that the monster has access to. For example, Duergar can buff up just a little to do extra damage, or turn partially invisible to cause opponents to have disadvantage, but not need to pinpoint their locations. Quasits can partially shape change to get a new movement mode for their next turn. Imps can make it darker and murkier, creating cover, without fully casting darkness.

Some creatures have some interesting extrapolations of their current abilities. For example, Gelatinous Cubes can spit those little undigested bits at people for small amounts of damage. Ghouls and ghasts get the ability to each corpses to regain hit points, and can then cough up crawling claws. I love that. Ochre jellies can detonate jellies that split off from them, and Nothics can echo spells that they have seen cast in their presence.

There are a few of these legendary actions I wanted to look at because I think they attempted to get a little too ambitious, or maybe pushed the general boundaries of 5e logic a little. Both dryads and harpies get an ability that lets them command a charmed opponent to make an attack for them, and since both of those monsters very specifically call out that they charm their opponents, and charm has a very specific effect in 5e, I feel like these legendary actions muddy the current boundaries of what charmed entails, and might cause confusion over the effect more broadly. Githzerai get an ability that lets them reroll initiative, and I can’t help but feel like that’s just too disruptive, especially as an action that they might take every turn in combat. Quaggoths get an ability that let them steel themselves to the damage they take, and take in a variable number of rounds later, and while that sounds cool, that feels like fiddly bookkeeping, again, especially if it gets used more than once in the same encounter.

Some of the CR 3 monsters have very situationally useful legendary actions, and I worry that they won’t get much use out of all three of their actions as written. Additionally, some predators, like tigers, don’t get a damage boosting ability, or an attack probability boost, but get the ability to move and hide, but given the tiger’s size and the requirements for hiding, this probably isn’t going to help them all that much without an accompanying alteration for the conditions under which they can make a stealth check.

There are a lot of imaginative expansions of creature abilities included in this product. I especially like the idea of making sure that a monster can use even a lesser version of one of its signature abilities before the fight is over, or more often than usual. The fact that animals that use these abilities feel more dangerous and more like themselves is a big plus as well. Beyond just using these additional actions as legendary actions for lower CR creatures, some of these feel like just good abilities to add to the creatures’ stat blocks to make them more varied or more versatile.

Because of the action economy of D&D 5e, if you try to turn a CR 1 or CR 2 creature into more of a “boss fight” but only allow them 1 or 2 legendary actions instead of three, I don’t think it’s going to create the desired effect. I also feel that several creatures have legendary actions that are so situational that their legendary actions will go to waste. There could stand to be a few more “all-purpose” legendary actions for those creatures.

In many cases imagination pays off in creating evocative abilities, but in a few places, what sounds good on paper (roll initiative again, prepare multiple kickers for actions to be taken later, delay damage) may be a huge pain to actually utilize at the table.

If you are like me, and wish 5e had more “nastier specials” like 13thAge monsters get, and generally want more mechanical toys for monster stat blocks, you may be interested in this product, but I can see how the lower CR range, and even using the product exactly as detailed may not appeal to every 5e dungeon master.

What I saw in this product does make me want to see additional volumes with a wider range of creatures, maybe with just a little bit fewer of those “delayed” opportunities or very useful but only in limited circumstance abilities. When this product resonates, it resonates hard with imaginative abilities that are in tune with the “story” of the monster.