It’s no secret that I’ve been critical of The Rise of Skywalker, and that I’ve been wondering what has been going on inside of Lucasfilm. My suspicion isn’t that many of the Star Wars problems aren’t native to Lucasfilm, but are the unique friction that has come from Disney trying to get the same output from Star Wars that they have from Marvel Studios.

Because of that, I was a bit worried about the second season of The Mandalorian, because I was afraid that with greater scrutiny from Disney on the show, there would be more pressure to do “big” things rather than tell the story. Hearing rumors about casting for characters like Boba Fett, Bo-Katan, and Ahsoka didn’t help with my fears.

Looking at the World Through Cis Lenses

Throughout all of this, my primary concern was, “will this be a good story that doesn’t get tampered with by Disney executives?” I was wrong to be that focused, and I’ll go into that in a bit.

Returning to the show for the second season was Gina Carano. Giana Carano had already gone off on a tirade earlier this year about the Corona virus and freedoms what was dangerously out of touch with the realities of the pandemic.

Of course, this also included a backhanded criticism of the various protests going on around the country because of the very real and very horrific threat of police violence against black people ongoing in multiple cities.

When it came to Gina Carano, I wrote this off as “well, she was in season one, and they already filmed season two, so I’ll just kind of weather the storm.” I knew about the comments about COVID precautions and the protests, but because I’m a cis person, I wasn’t paying attention to see this issue come up–Carano got into a pissing contest with, well, most of Twitter, because she wanted to mock including pronouns in a profile. 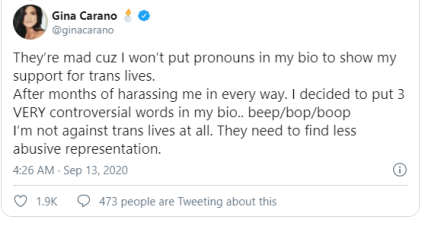 This went on for a while, from her inclusion of “Beep/Boop/Beep” as her pronouns, to her proclamation that she isn’t anti-trans, but trans people need to find better representation, to saying that her co-star Pedro Pascal taught her why it’s wrong to mock pronouns, but she still feels its important to maintain her “no pronouns in bio” stance.

I’ll circle back around to all of this.

Last year, when Bill Burr was on The Mandalorian, I didn’t know who he was. I had a feeling he had to be some kind of “stunt casting,” because he stuck out like a sore thumb as a “look at this guy” character rather than someone, you know, acting. But I generally liked the episode, and I was happy that the character seemed to get what he deserved in the end.

Side Note: I was going to look up some examples of Burr’s anti-Trans jokes, and even though I found some, there is no way I’m sharing them on this blog. They are unfunny and pretty vile.

Bill Burr is nominally a comedian. In that he makes money from telling jokes on stage. I learned that Burr has, among other marginalized targets, included jokes in his act that target the trans community. This wasn’t a recent development, but as recently as September of last year, he had a Netflix comedy special where he does the same thing again.

Now we come to the most recent incident at the intersection of The Mandalorian and anti-trans behavior. For the current season of The Mandalorian, Rosario Dawson was cast as Ahsoka Tano, a character that has only appeared in animated form previously. Unlike Bo-Katan, who was played by the voice actor that portrayed her in live action (Katie Sachoff of Battlestar Galactica fame), Dawson has never portrayed the character previously, and several years ago mentioned that she would love to play the character if she ever appeared in live action.

To frame ALL of this together, Ahsoka’s voice is heard in The Rise of Skywalker, provided by the original voice actor, Ashley Eckstein.

I was torn, because this screamed stunt casting to me, but at the same time, I’ve loved Rosario Dawson in many performances in the past, not the least of which was her Claire Temple character that was interwoven between the Marvel Netflix series.

But then we have this:

Rosario Dawson and Her Family Sued Over Alleged Transphobic Assault

Unlike Bill Burr, I knew about this before this season of The Mandalorian started. Part of me was still holding out hope that because the Dawson casting was a rumor, even though it had been leaked with a number of other cast members that turned out to be accurate, that it wasn’t going to come through. But then she appeared as Ahsoka in this week’s episode.

My primary focus this season of The Mandalorian has been criticising how uneven it has been, and thinking of this in light of stunt casting and potential pressure from Disney, now that The Mandalorian is the primary point of interest across their entire streaming service. That is a focus I could have because I have the privilege to ignore the rest of what was going on with the series.

I should have been paying attention to casting people like Burr. I should have been more vocal about Gina Carano’s comments. I knew about the issues with Dawson, and I was still more concerned about if she was going to deliver a performance that aligned with Eckstein’s than the fact that her appearance on this show is perpetuating a problem that Disney and Lucasfilm have with continually casting transphobic celebrities to appear on this show.

This is a matter of perpetuating the idea that trans lives aren’t worth protecting and preserving, because we can allow the struggle to be invisible to us.

I can have the privilege of analyzing if the story is going in the direction I think it should go, but there are people that are hurt by the continued indifference that those of us with privilege show to this kind of action.

In an era where we have politicians rolling back protections on trans people and undermining health care that many trans people depend on, this isn’t a matter of having a few unsavory actors appear in media. This is a matter of perpetuating the idea that trans lives aren’t worth protecting and preserving, because we can allow the struggle to be invisible to us.

Disney and Lucasfilm need to do better. Lucasfilm representatives have often talked about how Star Wars is about standing up to oppression and standing for those that are oppressed, but the ongoing issues with The Mandalorian and it’s cast are putting the lie to all of that.

I need to do better in prioritizing what is important in the media I consume.