What Do I Know About Reviews? Dungeon Master’s Screen Wilderness Kit 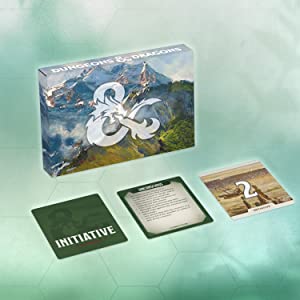 I rarely get gaming products for my birthday or Christmas, because even the geeks in my life have a hard time keeping up with what I have or don’t have. That said, as much as I have a weakness for GM screens, I haven’t been quite as ardently picking those up since, oh, around March of last year for some reason.

This Christmas, however, my kids lavished me with so much nerd content. One bit of nerd content was the D&D 5e Dungeon Master’s Screen: Wilderness Kit. Before I get too far into this review, I’d like to direct you to my fellow gnome, elder statemen of the Stew, Troy Taylor, and his review after receiving HIS screen for the holidays.

The kit is presented in a heavy paper folder, with five dry erase style handout pages, multiple pages of punch out cards and a foldable box, and the screen itself, a four-panel landscape cardboard screen with a matte finish. This has a full color set of wilderness images on the player facing side.

The Box and Cards

If you have seen the Essentials Kit for Dungeons & Dragons 5e, you have seen a similar set of cards and a fold up box. In this case, the box is pretty slim, but can easily hold the initiative cards (which just have numbers on them) and the condition cards. The condition cards not only have the standard D&D 5e conditions on them, but also the rules for exhaustion, heat, cold, and wind, which all makes sense for a wilderness exploration focus.

The dry erase sheets include pages that include the following:

The actions in combat page summarizes the same actions you can find in the Player’s Handbook, and on some versions of the D&D DM’s Screen. The Wilderness Chase reference references the chase rules from the Dungeon Master’s Guide (5e), without the Urban Chase reference table. In addition to this information, it includes the Weird Locations and Monuments random tables from the Dungeon Master’s Guide.

To facilitate the separate cycles, the cost of provisions and the requirements per cycle are shown per day and per week. These prices aren’t new, but they do make it a little quicker to referencing the longer travel cycle.

Instead of providing multiple terrain encounters or specific monsters, the random encounter chart instead is broken up by single powerful creatures, an even group of hostile monsters, friendly travelers, or rolls on the monument or strange location table.

The only real “new” things in the procedure are the broad encounter chart, and the procedure for long cycles of travel. While this doesn’t seem like much, I think it’s potentially really important to “give permission” to group travel by longer cycles. I remember my early days of running AD&D back in the day, where I first ran into random encounter charts and weather charts, and if the group was traveling, say, 30 days to their next destination, I really thought the best way to handle that was to roll for 30 different random encounters and 30 days of weather. I started rolling up months’ worth of “pre-rolled” travel so that I felt more prepared and better able to pace overland travel.

Knowing that the people publishing the game are telling you “no, if you are traveling for 30 days, you should just have four noteworthy things going on to make it feel like a trip” is an important tip for new DMs, especially running adventures like Storm King’s Thunder or Rime of the Frost Maiden, where traveling from location to location is part of the action.

This next section is going to compare what is on each panel of the screen, using the DM Screen Reincarnated as the baseline. This is going to be a bit of a deep dive, but if anyone wants to know what exactly is different beyond the extra components, I want to have an answer ready.

Panel one of the new Wilderness Kit does not include the “actions in combat” section, but it’s included on one of the dry erase handout pages. It’s also lacking the pictures of what area effects look like.

Panel two of both screens has conditions, although the wilderness screen has these printed slightly smaller, and split into two columns. The “reincarnated” screen has one column starting on panel two, and carrying over to panel three.

Panel three of the “reincarnated” screen has the other column of conditions summarized, as well as the information noted in the section on panel one, above. The Wilderness Kit has the following information:

The fourth panel of both screens has the following information:

The Wilderness Kit screen has the following information as well:

For the most part, the Wilderness Kit maintains almost all the information by making it a bit smaller, but you will be losing the “actions in combat” section on the screen, but you’ll still have it available to pass around the table on a handout.

While there are a lot of rules that aren’t new in this kit, the way they are brought together in one place, and the addition of the “advice” to shift the scope of travel for longer trips, make this a good product for DMs that are going to be doing a lot of overland travel in their games. The screen is attractive and solid, and I love having tools for tracking variables, like the dry erase provision trackers.

There is also a whole discussion we can have about if you want a GM screen or not, and when it comes to D&D 5e, it’s very easy to have “specialized screens” to swap out depending on what kind of scene you are running. Gale Force 9 makes specialized screens for almost all the major adventures, that often have adventure specific information on those screens. There is less of a feeling of “this is going to be the definitive screen” than there might have been in past editions.

This is a weird one to pin down as far as recommendations go. I think that if you don’t have any GM screen yet, this one is probably the one to get, unless you are absolutely certain you won’t be doing much long-term overland travel. I think this is a stronger screen for newer GMs, but that also makes me wish that we had a short booklet addressing travel more intentionally.