What Do I Know About Reviews? Arcadia Issue 4 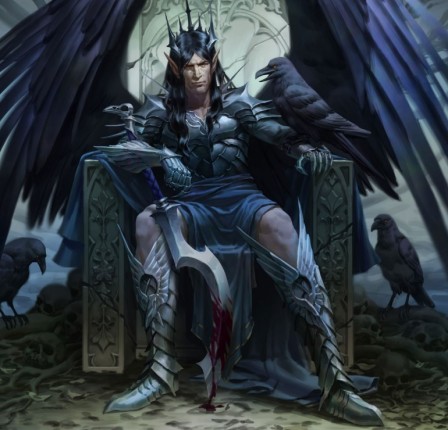 Arcadia, MCDM’s D&D 5e focused publication, is back from a short hiatus. This hiatus was planned after the first three issues, to allow the company to take stock and evaluate content moving forward. Before we dive into the publication, the takeaway from the introduction cited the following observations and future directives:

That said, James Introcaso notes in his introduction that several articles were still contracted before the survey, so there may be a transition into the new guidelines.

This issue continues the tradition started with the first three issues, of impressive cover art, and attractive internal formatting. There are multiple illustrations of the mounts, locations, and NPCs detailed in the publication, and the various maps that were available via link in previous issues are now integrated into the magazine itself.

This issue is 41 pages, including the full page OGL statement, resource links to outside versions of the images used in the magazine, author biographies, a credits page, and a table of contents.

The first article in this issue is a sequel to one of the first articles in Arcadia, introducing dedicated mount rules and special mount stat blocks to the game. This includes the axolottle, chuul, bulette, and juvenile purple worm as mounts. The theme of this article is expanding mounts into new arenas for travel, such as water borne mounts and burrowing mounts.

The final section of the article mentions Omnimounts and provides an example of one. These are creatures designed to carry entire parties for extremely long distances. The example is an awakened telepathic purple worm that enjoys long and interesting trips. In a development I would have never foreseen (because I’m not the Kwisatz Haderach), you summon Phlox but drumming on the ground.

I really enjoy these mount rules. I like that they kind of echo some of the summoning and “pet” rules that have recently been used in 5e design, such as adding proficiency bonus to certain statistics. The magic items answer several issues that might come up, especially with dedicated aquatic mounts. If I had one wish, it would be that we get a few more “standard” fantasy mounts. I love basilisks, toads, hippogriffs, nightmares, owlbears, warhorses, and the options in this article (especially the quirky axolottle, which are great), but I wouldn’t mind a wyvern, giant bird, or wolf here or there in the future. 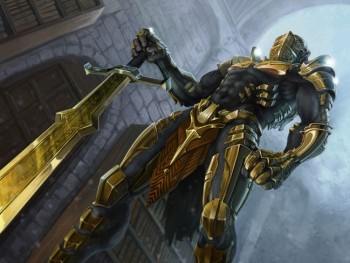 The Chained Library details a location that specializes in storing dangerous books. Blind celestials guard the books, to keep them from becoming corrupted by any of the tomes. Agents sell valuable, but non-evil books to generate funds, while others look for and acquire dangerous tomes to bring home.

Magical libraries are a fantasy element that will always catch my attention. Candlekeep is one of my favorite places in the Forgotten Realms, and I love The Great Library of Palanthus and Astinus’ role there. This library has a more sinister bent to it, as a repository of evil books, but it’s a great location for adventuring hooks, of which the article provides many.

Reading through this, I can see using this location as a bleaker, more dangerous starting point for some of the adventures in Candlekeep Mysteries, adding the additional spin that the characters may need to avoid the curses haunting the library or prove that they haven’t become tainted before they can leave the location.

The final article includes various encounters that can be included in adventures as characters are traveling between locations. These are less than an adventure, for the most part, but more than a number and disposition of creatures. These encounters include the following: 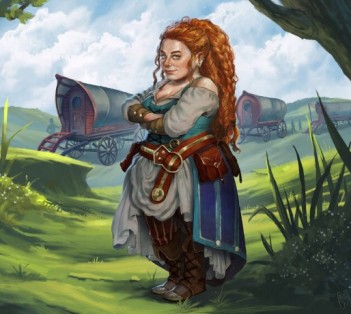 Several of the NPCs in these encounters are provided with traits, ideals, bonds, and flaws, which I like for NPCs. They are a nice, quick summary to explain the character’s personality and motivation in bite sized chunks. I also really like that there are multiple “tiers” of resolution going on in different encounters. Characters can prepare a camp for an assault in one of these, and in another, multiple “secret identities” are provided to spin the encounter off into different directions.

I do wish the kobold leader had gotten the same kind of NPC treatment as some of the other characters. Without that list of traits, this feels like a more standard “evil humanoids doing evil, served up for adventurers to kill” encounter. I would have loved to have some details, like that local humans did something to curtail the kobold’s mining, leading them to try and recoup their losses.

Part of me also wishes the bandit ambush had one more twist, possibly a bandit that has a reason to be on the PCs side, trying to signal them about the ambush, maybe while still trying to not give themselves away to the bandits.

That said, these are solid encounter “bits” that provide a lot more than a monster name on a chart, and I appreciate that. I would like to see more of these in the future.

All of these articles fall into the magazine’s stated purpose of being table ready. They are all interesting and reading through them, I was continuously thinking of how I could use them in a session or in a campaign. My favorite is The Chained Library, as it’s an evocative location that has so much utility as a source of plot hooks.

I really liked the Omnimount preview, but I almost wish we got another mount or some more magic items and saved the singular omnimount for the promised article full of them. Despite the fact that they are intended as modular bits, there are a few places where I wanted a little more from the sample encounters, despite their overall strengths.

For anyone that wants ongoing content for their D&D 5e game, enjoys reading about the game and what you can do with it, and wants to see some killer art, this continues to be a valuable resource. I’m looking forward to seeing more “sequel” articles, and how the new directions are realized.