What Do I Know About First Impressions? Big Bad Bundle (OGL 5e)

After I wrote my first impression of Hit Point Press’ Big Bad Booklet Patreon, they reached out to me to ask if I wanted to look at more of their offerings. I said yes, and I received the bundles of previous Big Bad Booklets currently available. The first volume contains issues 1-6, and the second bundle contains issues 7-12. For comparison, the issue that I looked at, Fulmani, is volume 22 of the series.

I’m going to look at each of these bundles separately. This is still going to be a “high level” look at these individual offerings, but I don’t want to bite off too much in one sitting. 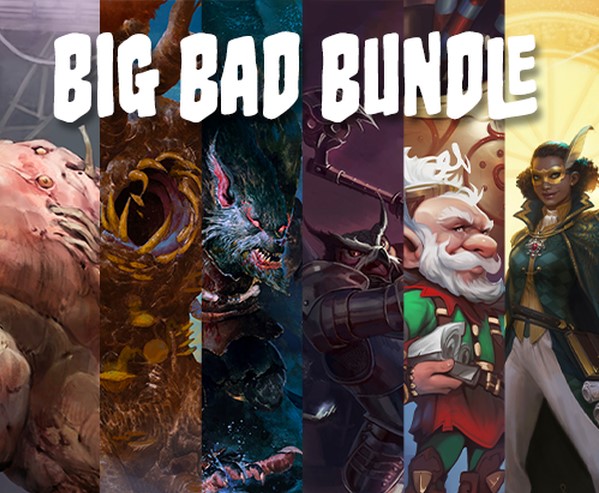 The first bundle includes six volumes of Big Bads, and a print and play PDF that gives you the files for printing out your own version of the cards that were included with the original physical versions of these products.

Each of these volumes is around 14 pages long, with about 12 dedicated pages of content without OGL statements and “end papers.” Each one has a full color painting for the cover, and internal colorized line drawings on the interiors. The layouts for all these products are single column, often with a few sidebars expounding on specific aspects of the details provided.

Each of these has several pages of backstory for the “boss” being presented. There is a section on roleplaying the character, and a section on tactics. In addition, there are traits provided for each of the bosses, including ideals, bonds, and flaws. The final section before getting into the game statistics are adventure hooks, usually three per boss, giving you an idea of how to introduce the character into an ongoing campaign.

Most, but not all, of the bosses presented will also have lair actions, as well as what constitutes that creature’s lair. For example, in some cases, it’s a pretty simple matter of one particular grove, but in other cases, it might be whenever the creature is in their war camp on the march. Several, but not all, also have some associated monster stat blocks representing followers, minions, children, or other ancillary aspects of the boss in question. Some of these also have unique magic items associated with them, which also appear in their booklet.

I’m going to take a quick look at the bosses included in this bundle. This includes the following characters:

Of all the volumes in the bundle, Daniel has a content warning included. He’s not just a stitched together mass of corpses, he’s a stitched together mass of corpses that doesn’t quite work right, and also causes some very specific injuries, as well as having a unique way of processing the world. I argue that some of the events in Daniel’s history are as deserving as a content warning as any of the body horror elements.

Daniel has a limited capacity for understanding the environment around him, and only really gained sapience through experiencing pain. That makes for some unfortunate and dangerous interactions with other living beings. Unlike most of the bosses in this bundle, Daniel doesn’t have lair actions or additional monsters, but his backstory hits hard.

Reading Daniel’s backstory, this would be a great character to use in a Ravenloft game. He’s dangerous, supernatural, and has a tragic backstory. You feel bad for him, but he’s also likely to be a continuous danger if not dealt with. That said, I would say anyone using Daniel should try to communicate as much as possible through his ability to project memories, because you don’t want players to just see this thing as a monster. If they must harm Daniel, you want to leverage that backstory to make it hurt, assuming your players are onboard for that kind of story.

Carsus, The Tyrant of the Trees

Carsus is essentially an “anti-treant,” an evil tree that dangerously controls a stretch of forest, demanding tribute. Carsus has lair actions as well as smaller creatures split off from itself, in the form of single creatures and swarms. Given that Carsus demands tribute, and he’s suffering from an affliction that he wants to survive, you have built in reasons to roleplay with him, if and until something goes wrong with the negotiations, or the player characters are no longer useful.

Verreaux is a sapient owlbear that wears armor and carries a big axe. On one hand, he’s trying to figure out his history, but on the other hand, he likes being in charge. He’s taken over orc tribes and has inspired worship from his followers.

Verreaux’s booklet includes a random offerings table, lair actions, a stat block for his chosen warriors, as well as legendary actions. Because of Verreaux’s potential divine ascension, one of his regional effects interferes with divine casters, and he can use lair actions to summon warriors to him, curse others, or restore cleric spells to allied characters.

I really like this boss, and I like that while it’s still using orcs as adversaries, it’s adding an interesting wrinkle to the whole concept, with a potentially ascending demigod following them directly. My biggest quibble isn’t entirely the fault of how the booklet is presented, but the fact that there really isn’t a definition for “divine magic” in 5e. The book mentions clerics and paladins being affected, but I think the best “shorthand” I’ve ever been able to come up with is to say that spellcasters that can use a holy symbol as a focus would be affected. That’s all a bit to the side of the focus of this booklet, however.

Anytime you combine werewolf with giant, you are going to seize my attention. Tessentenner is a hill giant exile that ate a bad wolf and can turn into a lycanthrope now. He attracts other lycanthropes to his banner and doesn’t particularly like other hill giants these days. There are sidebars on giants and lycanthrope, as well as a regional effect that makes lycanthropy even more potent. This booklet also includes an additional magic item.

Fantastic Lairs includes a lycanthropic frost giant which I also loved quite a bit. At the time, I was thinking of how to include this character in Storm King’s Thunder, although its challenge rating is a bit on the high side. At CR 8, Tessentenner would slot into that adventure nicely, and it would be a great excuse to show why he may have gone on the offensive against other giants after simply avoiding them up to this point.

This one is holiday themed. If you don’t like parodies of winter holiday specials, you may not be as interested in this particular boss. Gollythank is one of the bosses presented that seems less like a full-on villain, and more like a character just trying to prove himself, making this a potential change of pace from other scenario big bads.

One of the things that makes Gollythank less villainous is that he was cast out from his toy making gig because of the potentially dangerous nature of his toys. Gollythank trusts his safety protocols, but they aren’t as iron clad as he believes.

Gollythank’s booklet includes a magic item, four stat blocks for his toys, and statistics for both Gollythank, and Gollythank’s, um . . . powered armor? Gollythank has lair actions for his cabin toyshop, as well as legendary actions he can use in his armor.

If this one isn’t to your taste in an ongoing campaign, I think there are enough fun mechanical bits to play with to consider using this for a holiday themed one shot.

I think this one may be my favorite of the bosses. This is another character that isn’t so much a villain as an antagonist. It’s also a bit of a bait and switch, because Akkadia isn’t one character, but identical triplets. They operate as thieves, attempting to steal bits of an artifact to cure their mother’s affliction, not realizing the full danger of the artifact in question.

Because Akkadia is a team of siblings and not a single character, each sister has her own individual ideals and flaws, while sharing the overall bond between all three sisters. Akkadia has lair actions if encountered in her hideout after a crime and has three unique magic items detailed in the book let.

The print and play cards include cards for all the bosses, the ancillary creatures, and the unique magic items introduced in the individual booklets.

I really enjoy how much space they give the backstories and motivations of these bosses. Given the size of the booklets and their format, these backstories may become detailed, but they only have so much room to expand. This is still more room than many campaign villains are given in published adventures.

I know later volumes address this, but this first set of bosses is very heavy on the male characters and male pronouns. That said, I really appreciate that content warning that came with Daniel’s story.

At this point, after looking at Fulmini, it’s very interesting to start from the beginning of the series and work my way up to the most recent iteration. Right from the start, Daniel’s singular status morphed into Carsus’ wider booklet of minions and lair actions. There is a lot of variety in this line, in tone as well as mechanical implementation, and I’m interested to see more of these . . .

Which I will soon, when my first impression of the second bundle hits the blog . . . just as soon as I find enough time.