What Do I Know About First Impressions? Tales of Xadia: Cortex Prime Digital Tools

Some of you may have known me long enough to know about my obsession with Marvel Heroic Roleplaying, one of my all time favorite roleplaying games. What you may not know about those ancient, lost days of 2012 is that when you played Marvel Heroic Roleplaying through Google Hangouts, there was a set of tools developed by fans of the game that let you build dice pools and indicate your dice totals and your effect dice.

God May Not Roll Dice, but The Watcher Does

Building dice pools is actually a simple process in Cortex games, but when people are new to the game, it can still get confusing. For most of these games, you can add one die from each section of the character sheet. What those sections represent from game to game may vary, but those sections are what breaks down the elements of what is important to know about a character in the game.

For example, in Marvel Heroic, this usually meant Affiliation (do you work better solo, with a partner, or as part of a team), Distinction (some epithet that describes the core of your character), Power Set (characters might have one or two of these, but usually you are primarily using one main power from each powerset), and Specialties (more generally, skills that your character knows). In Marvel Heroic, you would pick two of those dice to form your total, and one to be your effect dice. That means sometimes, if a task wasn’t especially difficult, you might use a die that rolled high and is also a larger die for your effect, instead of for your total. And then there are other rules I’m not going into at this point.

In addition to running Marvel Heroic Roleplaying through Google Hangouts, I also ran a lot of Marvel Heroic Roleplaying at local conventions. For those conventions, I found a great resource that was essentially a multicolored strip of paper with a space to put a die from each part of the character sheet, to help a new player assemble a dice pool. These were a big hit with most of the players I introduced to the game.

It’s been nine (!) years since Marvel Heroic Roleplaying came out, and the Cortex Prime rulebook now exists as a resource from which you can rebuild various Cortex Plus games elements by mixing and matching game rules. In addition Cortex Prime introduces three example settings that are playable right out of the book.

A demonstration game of Legends of Grayskull was played at Power-Con in 2020, and in that demo you can see a toolset being used for the game. As a fan of both digital tool sets that facilitate specific games, and a fan of Cortex games, I was very interested to get a closer look at those tools being used. 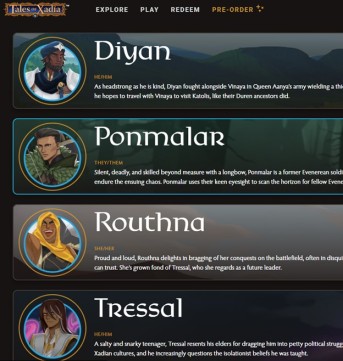 In between that preview and now, we have the full online version of the Cortex Prime rules available on the website, as well as the free example game of Hammerheads. Not only does the website have the core rules indexed and hyperlinked for use online, but if you have purchased the core rulebook, you can also download the PDF from that page.

In addition to the Cortex Prime page, Tales of Xadia is also up for preorder. The Lost Oasis adventure was released as a sample adventure, complete with pregenerated characters. This also gave us a look at what sections of the character sheet are going to be important, and thus emphasized, in Tales of Xadia. In addition to the original example adventure, people that preordered the game now have access to a follow adventure, The Gloaming Glade, and Fandom has been releasing additional pregenerated characters that can be used with either adventure.

Now, where all of this comes together is that those that have preordered the game now have access to the digital toolset that allows you to manage a character online. This online character sheet looks similar to the one used for the Legends of Grayskull online game. The current version of the character tools are still in development, so for example, you can’t make a character from scratch, but you can use any of the release pregens in online form. 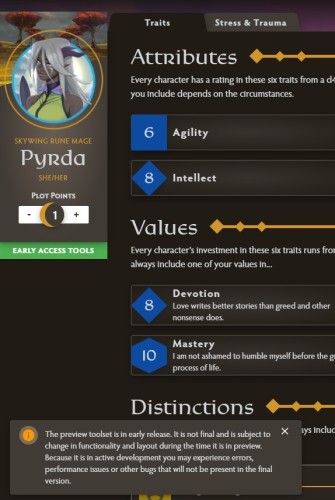 What Makes a Tales of Xadia Character Tick?

Tales of Xadia characters have have the following elements, from which a dice pool can be derived:

In addition to what makes up the character, there are a number of stress tracks that are derived from the conflicts modeled by the themes of the setting. If you move up a die past d12, you can’t act in the scene any longer, due to one of those forms of stress overwhelming your character. This turns into trauma, and if trauma gets pushed past a d12, you could be out of action in a much more serious manner. The stress tracks for the game are:

While most of these stress tracks are self-explanatory, the corrupted track often comes into play when using magic that wasn’t meant to be trifled with. This range of stress tracks allows for a pretty wide range of conflicts. You can have physical exertion, arguments, and examples of pushing past one’s fears, in addition to being physically injured in combat situations.

The Characters and the Toolset

The character tools on the site allow you to pick a die from each section to build your dice pool. The tools don’t keep you from adding more than one die from each section of the character sheet, because some special effects allow for characters to bend the rules by adding additional dice in some circumstances. For example, the Skywing Elf character has the ability to spend a plot point to add both strength and agility when attempting a task while flying.

That means you still need to know what your special effects do, although they are all clearly summarized in that section of the digital character sheet. It’s just worth noting that if you accidentally add too many dice from one section of the character sheet, the current toolset isn’t going to warn you about it. There’s no substitute for knowing how your character works.

I would love to say that gamers are all quick thinking and able to do math with the best of them, I’m pretty sure at least in my case, my creative brain and my math brain aren’t always active at the same time, so I appreciate any automation I can get.

On the “other” side of the sheet, you can mark what die level of stress your character currently has in each type of stress. Once you have your stress at a d12, there is a button that becomes active that lets you convert that stress into trauma.

I am very interested to see what this toolset looks like for a character that you build yourself, and also what the character building tools might look like. I know it’s a complicated process of deciding what rules to use and exclude, but I would also love to see this toolset available for the Cortex Prime rulebook as well as for Tales of Xadia. I realize that gets trickier, because you would have to build the optional rules being used first, before you could build a character, and then have a functioning character sheet that interacts with the rules selected.

If nothing else, I would love to see tools like this available for the example Hammerheads campaign, but I really like that setting, so I’m biased.

Speaking of my wish list, I would love to have a means of sharing player rolls and status in a campaign, as well as having a toolset for the GM’s dice rolling. Bonus points if it reminds you to use the stress/trauma from individual characters when you make your rolls. I’m not a big fan of VTTs in general, but I love purpose built tools that don’t have options beyond what you need to play the game, so I would love to see all of these moving parts able to be shared and used in conjunction.

This brings me to my broader point, that I actually think the best thing that could happen for the RPG hobby is to have customized digital tools that are tailored towards making the game they are designed for work smoothly. We have tons of multi-purpose digital RPG tools, but all of those end up creating additional prep time and mastery to optimize. I don’t know at what point this becomes profitable and realistic for individual companies, but the more a set of tools is made in conjunction with the rules, the stronger the ability to convert rules to playtime.