What Do I Know About First Impressions? The Star-Shaman’s Song of Planegea First Look 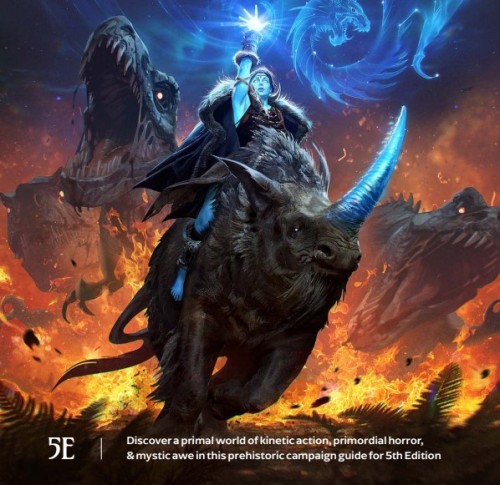 I’ve seen at least a few ice age settings for roleplaying games. Often, these settings either attempt to recreate an ice age setting as a more “historical” setting, or when fantasy is involved, they add in subtle, less powerful magic. I know there are compelling stories to be had in that kind of setting, but fantasy pre-history can feel a little tame when it’s conflated with the history of Earth.

That’s why I have to say that the buzz around The Star-Shaman’s Song of Planegea caught my attention. An upcoming project from Atlas Games, this isn’t a setting where magic is barely a spark, and the lives of the early sapient species are carefully trying to learn how to use tools and build greater societies. This is a primordial world that is both very different, and yet very connected to the form that many campaign settings will take later in their histories.

John Nephew, of Atlas Games, shared this preview with me. It’s also worth mentioning that this is a true preview. It jumps around a lot, but there isn’t a ton that you can pull from this preview document to directly use, but it does show a wide range of what the project is planned to entail.

Journal of the Distant Past

This preview is a 23-page PDF, including a front cover, back cover, and OGL statement, as well as the internal content. The artwork is bright and colorful, and filled with megafauna, dinosaurs, various societies and their clothing and gear, and the prehistoric forms of D&D lineages like goblins, elves, and saurians (a lineage native to this campaign setting).

This is set up with a two-column layout, with lots of artwork included in this sample. While it’s using its own color schemes and fonts, the layout is very similar to official WOTC standards, meaning it should be easy to navigate for anyone familiar with the core D&D offerings.

The various sections in this book show some of the details on the following topics:

Most of this information is broad. For example, there are descriptions of how elves and dwarves differ in this age, or what names are used for different classes and the different nuances of how they function, but there isn’t much in the way of mechanics.

One thing different in this setting when compared to other “ice age” treatment I have seen is that this isn’t just the ice age of a fantasy world, this is literally the early world. This is a single world that, over time, will drift apart into different planes of reality. This is the universe, which will eventually give birth to everything that is to come. There is a physical land of the dead, there are elemental barrens ruled by genies. There are now greater powers or lofty deities from other planes. There are local gods of various locations that can be visited and with whom you can interact.

The stars war with each over at night until one wins the battle and becomes the sun on the next day. The world itself was born of an ancient dragon that lives in a volcano at the center of the land. Magic isn’t less plentiful in this era, but the world is new and still forming, so magic is potentially dangerous.

There are forces that feel like larval cosmic horrors that keep the sapient races from developing written language, developing complex numbers, or creating wheels or money. And when I say that they “keep them from developing,” that means they can sense when they appear, and they show up to deal with transgressors.

Did I mention that the giant empires are the dominant societies in this primordial world? Yeah, giants are an important part of this setting, so, I will fully admit, that was a vector straight to the attention centers of my brain.

One bit of D&D lore that I have always liked is the story that developed around the Spellweavers, creatures that are trying to pull all of reality back together into its original, undifferentiated state. I love the idea of a prehistoric setting that is that one world/one universe paradigm. 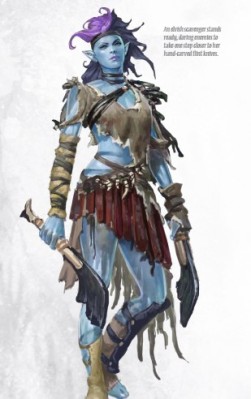 This preview doesn’t use the term “race,” but instead uses its own terminology, kinships. For those kinships that have different divisions, subkins are used to denote those special groups within a kinship.

Elves in this setting originally come from the land of dreams and are partially transparent. Dwarves are both flesh and blood, as well as stone, with gemstone adorned beards. Dragonborn are a newly arrived kinship, and in addition to the existing Player’s Handbook options, the preview mentions Dreas (trees that have transformed into people), Half-oozes (experiments created by sapient oozes), and Starlings (fallen stars that have fallen to the world from the Sea of Stars).

One of the things I have been appreciating more with current D&D 5e design is the inclusion of inspirational tables to reinforce as aspect of character backstory. Since the elves of this setting are continually distracted due to their separation from the land of Nod, we get a sample table from the elf entry that gives you a list of things that can cause your mind to wander.

The Saurian kinship and the subkin of Leatherwings is also previewed in this setting. Because Saurians have a strong belief about the dead and their place in the world, there is a table to help determine your character’s relationship with the dead.

The example Saurian kinship gains an ability related to ancestral guidance, which starts as a cantrip, then evolves into two other spells at 3rd and 5th level, each once per long rest. Leatherwings also gain the powerful build trait, but only when they are carrying something as they fly. 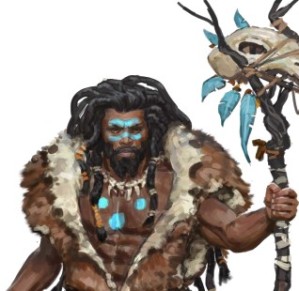 While it might be a challenge, I like the idea that all the standard Player’s Handbook classes are assumed to exist in the setting, but with slightly different roles. Monks, bards, paladins, rogues, and wizards get a name change in the setting, to ascetic, chanter, guardian, scavenger, and spellskin.

Clerics are shaman, and while they have a similar function, because there are local gods in different regions, clerics generally search out local deities to commune with them. Warlocks are framed as ambassadors to various powerful, but not godly, powers in the world. Warlocks always have that sinister edge to them, don’t they? Paladins swear oaths to local gods to gain their powers, and paladins and clerics still tend to find gods that meet the tenants of their domains and oaths. Wizards paint spell formulas as pictograms in caves, and tattoo these spells on their bodies, while sorcerers are naturally able to tap into magical power and shape it into spells.

In an interesting shift in tone, druids and rangers have a more sinister reputation, being seen as thieves that steal power from nature that the gods lay claim to. This makes them more outcasts than you might assume for a setting like this, and it also firmly embraces rangers as traffickers in magic.

This section also mentions, but doesn’t detail, some new subclassses that will show up in the setting:

I’m not sure how this will play out, but I appreciate the grand plan of making all the classes viable in this setting, especially as a means of reinforcing that this is the prehistory of maybe all D&D worlds to come.

There is no change in what gear is available to characters in this setting, but there are some “translations” to explain how they function in the setting. For example, weapons and armor might be crafted from stone, bone, wood, antler, or wood. Divine ivory from slain gods stands in for adamantine. In addition to the “translated” tools, a few other toolkits are added, like butcher’s tools and gatherer’s supplies. Coins don’t exist, but in places where you may not know what is needed in exchange for other goods, salt can stand in for a standardized form of barter.

We get the name of some new spells, but not specific examples. What I think is very interesting is that various spells like goodberry, create food and water, and resurrection all function, but they may upset the local gods or the King of the Dead. I like the idea that characters still have access to all their abilities, but there may be story consequences to those actions. I’m interested to see how much more detailed these repercussions might be in the full book.

I love factions. It’s the inertia of a campaign setting. There can be all kinds of monsters and treasures, but sometimes it’s hard to figure out what conflict happens in the world if the PCs don’t act, and factions make sure the world is in motion. They provide ongoing opponents, employers, and allies to the player characters.

In this case, we have traveling societies trying to forge the sapient kinships into a larger nation, people bound together to help one another run from the enforcers of the special rules of the setting, and monster hunting guild. There are also agents of the Giant empires, the primordial dragon children of the mother dragon, the demon and devil gods that are starting to develop into the factions of Hell and the Abyss in the future, aberrations worshipping weird creatures, and agents of the Nightmare World, just to name a few.

There is also a section talking about common monsters to the setting, and those that help reinforce the tone of the setting. This includes dinosaurs, giant bugs, and real-world megafauna, as well as new monster types like proto-gods (the precursors of things that will eventually live on other planes).

I like the sidebar for optional abilities. I think this is a good way to address changes in design philosophies while we’re still seeing what lineages built entirely under this paradigm look like in the core books.

Because there is some discussion of slavery on the part of the giant empires, as well as some aspects of survival of the fittest, I really hope there is a good section on safety tools and setting assumptions. It was something I think Ghostfire did very well with their Player’s Guide, so I hope to see other third-party publishers follow through with making safety an important aspect of detailing the setting.

When this rolls out in the Fall, I will be checking back in with this setting. I would love to see the weird, wild, primordial stuff that might populate this setting in its final form.