The Future of D&D, Part Two: The Near Future 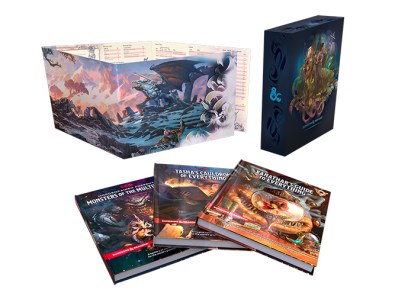 While we initially got to see some of the future design of “caster” stat blocks in The Wild Beyond the Witchlight, this doesn’t appear to be a one-time experiment. During the Future of D&D segment of D&D Celebration, new slipcase editions of books were announced, and they aren’t 100% reprints of the original versions of these books.

This reissue is going to be called the D&D Rules Expansion, and its comprised of Xanathar’s Guide to Everything, Tasha’s Cauldron of Everything, and . . . neither Mordenkainen’s Tome of Foes nor Volo’s Guide to Monsters. Instead, we’re getting a new hybrid book, Mordenkainen Presents: Monsters of the Multiverse.

What’s Up With That?

This isn’t totally unprecedented. For example, we got a consolidated version of Tyranny of Dragons, putting both original adventures in one volume, with some minor modifications. That said, I’m betting there are a few other reasons for this reorganization of the supplemental monster books. Here are a few guesses.

What Don’t We Know?

If you’ve looked at some of the more recent Unearthed Arcana releases, like the dragonborn, it looks like design is moving away from race and sub-race. Chromatic, Metallic, and Gem Dragon born weren’t arranged as subraces of Dragonborn, but as distinct ancestries. Additionally, we know that going forward ability score bonuses aren’t going to be part of the design of ancestries. That means we may see some interesting ancestry redesign. But will we get a look at new versions of the Player’s Handbook ancestries?

I don’t know that we will, in part because the recent survey asking about elements of the Player’s Handbook felt like it was more about, well, what we’re going to talk about a little bit later. So, I don’t know that we’ll get total revamps quite yet. But you never know.

We also don’t know if we’re going to see monsters outside of the “expanded” monster books. It might be tempting to revise some spellcasting monsters for the new caster standards, especially the lich. But if you are adding two books together, and consolidating some supplemental ancestries, you only have so much room, and that might not go towards monsters that will get their due in 2024.

I’m also curious to see if we get all the supplementary text repeated in Mordenkainen Presents. It would be a shame to lose the deeper backstory material introduced in Tome of Foes, and even the less squicky details added for certain monsters in Volo’s Guide, but it’s also a place where you could cut some page-count. I’m curious to see what makes the cut, and what is deemed “must-have” consolidated content. 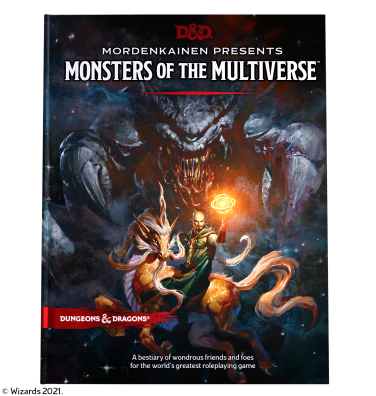 Is Mordenkainen Presents: Monsters of the Multiverse going to be the only revised material?

The sub-classes presented in Tasha’s Cauldron of Everything introduced some different design paradigms. These included moving limited use abilities from (ability bonus) number of times to (proficiency bonus) number of times. In general, that meant you aren’t being penalized for not boosting an ability as high as it can go, especially when that ability score is secondary to what the class normally utilizes.

Another paradigm shift is that several newer subclasses allowed for some subclass abilities to be recharged before a short or long rest by spending another resource. For example, classes that can cast spells might be able to recharge a per long rest ability by sacrificing a spell slot of a specific level.

The subclasses in Xanathar’s Guide to Everything were designed before this paradigm shift. There are still subclasses that have (ability bonus) number of uses of various abilities. It is possible that the reprinted Xanathar’s Guide might have some subclass redesigns included.

Is this a given? No, but if the thing we’ll be talking about in a bit, coming in 2024, is going to be backwards compatible, it would probably make sense for the most recent version of the rulebooks to have the designs match the current paradigm. The biggest strike against this possibility is, this is a lot of redesign work to be doing while also planning for future releases.  I’m also interested to see, should there be any revisions, if the shared campaign material makes it through the process.

Maybe there won’t be any structural changes. And if there are, I’m wondering if all the digital versions of products will remain the same, or if they will get changes as we’ve seen with some errata. Lots of questions.

About Those Electronic Resources

We know that Mordenkainen Presents: Monsters of the Multiverse is going to be sold as a separate product. This leaves us with some interesting questions.

Honestly, seeing how well this wave of “refreshed” products is streamlined into the electronic platforms that currently are licensed for D&D material may be an indication of how closely aligned WOTC is going to be with their digital partners going forward.

I’m not sure that these are integral to the D&D experience, but since almost everything else mechanically significant has been reprinted from the Sword Coast Adventurers Guide, I’m wondering if we might see the last few subclasses that haven’t been reprinted make it somewhere.

Now, after I have some time to refresh the synapses, we’ll talk about the biggest question marks out there in another post. The big question marks surrounding “new formats” for releases, digital initiatives, and the revised core rulebooks coming out for D&D’s 50th Anniversary in 2024.