What Do I Know About First Impressions? Arcadia Issue 10 (5e OGL) 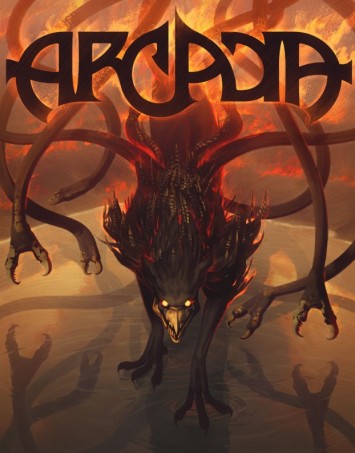 I’m a little late looking at this issue. I think there was some kind of holiday, and there was food. It’s kind of confusing. At any rate, I’m going to pass along some thoughts on MCDM’s Arcadia Issue 10. Ten issues already, that really snuck up on us.

While I am a member of the MCDM Patreon, I was also provided a review copy of Arcadia Issue 10 to review a few days early. Clearly, I didn’t take advantage of that extra time, this time around. The main content warning I would provide for this issue is the slightly gruesome gelatinous cubelet artwork, where the little guy adds some personality by carrying around some extra body parts.

Body of the Matter

Arcadia Issue 10 is 38 pages long, including a credits page, a table of contents, a letter from the editor, four pregenerated stat blocks for use with the adventure included, a page of resource links, author bios, and a full-page OGL statement.

As always, this issue has extremely nice formatting and layout, with each article getting its own color schemes and artwork. All of the formatting is in line with WOTC standards, but with the typical MCDM flourishes. Each article has unique artwork created for that article.

This month, the articles include the following:

This article provides a new spell, Find Greater Familiar (3rd Level), as well as five different sample greater familiars to use with the spell:

Beyond this, however, the article provides a base stat block for a greater familiar, which can be customized using a point-buy system. Yes, I flinched a little at that, because I had flashbacks to dealing with Eidolons in my Pathfinder Society days. Worry not, however, because this point buy system is a lot more reasonable and constrained.

The article gives several examples of what makes a good trait to give to a familiar, and then provides a chart with summarized abilities from which to pick. In addition to the point buy method, there is also advice on challenge rating and the upper limits of what even a greater familiar should be able to accomplish.

The Find Greater familiar spell requires you to forgo your attack to allow a familiar to attack, so unless you are really on the ropes, this probably isn’t going to be the best option for you. It also lists several other existing creatures that can serve as greater familiars. My favorite part of this spell, however, is the ability to use your reaction to dismiss your familiar before it takes damage if it is the subject of an attack or save. My poor familiar Hellbird would have died so much less if I had this spell in that campaign. 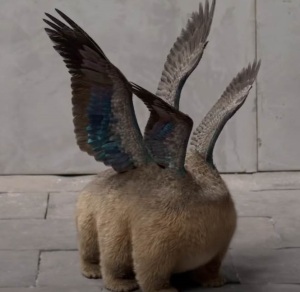 Just for fun, I decided to give this a spin, and decided to make Morris from Shang-Chi as a familiar (Morris is a creature from Chinese legends known as a Hundun). I bumped up Morris’ constitution, hit dice, and dexterity, gave them proficiency in survival and stealth, added a fly speed, limited telepathy, and blindsight. Overall, still not a particularly combat-ready familiar (which isn’t what I was going for), but handy as a scout with the additional ability of blindsight, and a slightly better chance to survive getting hit due to the higher armor class and additional hit points.

Between the new creatures and my experiment, I’m pretty happy with how this turned out.

The next article is about new magic items, but with a higher concept. The Arms of Accord are magic items that were forged in ancient days to commemorate cooperation between different species of humanoids. Each one of the weapons can only be attuned by a group of humanoids, but when the weapons are in proximity to one another, they grant their wielder extra abilities. The weapons include:

The article uses these magic items to express several points. The first one is world building. These weapons can be shown as examples of the harmony that once existed between different humanoid species and serve as an impetus to renew that harmony if it doesn’t exist in a campaign.

They also serve as a template for weapons with special attunement qualities, and additive abilities. Whenever the weapons are within one mile of one another, they gain the ability to cast a spell, and the more weapons are in proximity, the more powerful the spell is. From a worldbuilding standpoint, you could even swap out these spells to represent works of magic that can only happen when the weapons are all claimed and in proximity to one another.

In addition to presenting these weapons and the story elements evident in the special attunement and additive abilities, there is also a section on how to limit magic items when they are found by lower-level characters but stay with them over the course of a campaign. Suggestions include bonuses that change as the characters gain levels or limiting weapons that have “always-on” abilities to only working a number of times per day equal to a character’s proficiency bonus.

I like the magic items presented, and I enjoy the concept of the weapons resonating with multiple items in the same area. I can see using similar related humanoids attuning to specific weapons to symbolize past associations in a campaign. I’m thinking about the ramifications of switching some magic items to a “proficiency bonus” number per day, and while I don’t know how well that would work, it is an interesting concept to explore.

This is an adventure . . . kind of. It’s actually kind of a one-shot adventure with its own mini-game element. Characters pick one of the stat blocks of gobbos (a specific type of goblin) to play in the adventure. There are dungeon geomorphs provided, and the characters place different rooms in different configurations. The gobbos then defend the cave from different waves of intruders.

The Heart of the Cave respawns gobbos that fall in defense of the caves, and the primary goal is to keep any of the intruders from removing the heart from the cave. If that happens, catastrophic things begin to occur, and gobbos don’t respawn.

Each of the gobbo stat blocks has a score tracker on it, measuring total enemies killed, friendlies killed, deaths, and trap activations. If you haven’t picked up on it yet, this is definitely a more comedic scenario. Rooms include a gym, a beach, and a child’s playroom. The gobbo stat blocks include Chonka, Emoblin, Lil-boop, and Flameblin gobbos.

I like the concept of a one shot that has special rules and a running theme as a change of pace, and there are a lot of well thought out elements that would make this one fun. I’m not sure I personally would run it, as it goes a little more over the top than I would be comfortable running, but that’s just my preference.

The familiar article is definitely my favorite this month. It strikes a nice balance between customizability and constraining the concept of what a familiar should do in the game. The system for customization is solid, and the additional familiars are fun.

Reading through the Arms of Accord, I started thinking about what “linked” magic items I would place in different campaign settings, as well as how I might limit abilities at lower levels. I like an article that can get my own creative juices going, in addition to providing solid material.

I like the idea of a “build your own defenses” one shot. I wish the gobbos had a challenge rating listed for them, because that might have given them a little more utility as NPCs that could be reflavored for other adventures.

I’m all for more familiars, mounts, and summoned creatures. I like rules that make “companions” that are traditional to fantasy easier to use in the game. I also wouldn’t mind more sample greater familiars in the future.

Despite being primarily a DM, I love new magic items, and I like being able to find just the right items to give a character to fit their personality and the campaign in which they participate. Definitely on board for more magic item articles, especially with built-in story hooks.

I wouldn’t mind seeing other defensive-style adventure, especially if they could be framed in a way that makes it able to pop into an existing campaign, instead of as a one-shot. I like the idea of players getting to have the chance to play with the decision-making process of what terrain and conditions under which an encounter will happen.

It’s worth noting that this month’s Arcadia doesn’t have any MCDM conceptual addendums, such as organizations or followers. I’m not sure what that would have looked like, other than maybe an amusing gobbo organization, or maybe a Kingdoms and Warfare unit that could be summoned by multiple weapons resonating from the Accord. It does reinforce that those MCDM specific customizations don’t appear to be a mandatory addition.