What Do I Know About First Impressions? Monsters of the Multiverse Part One, Fantastical Races (D&D 5e) 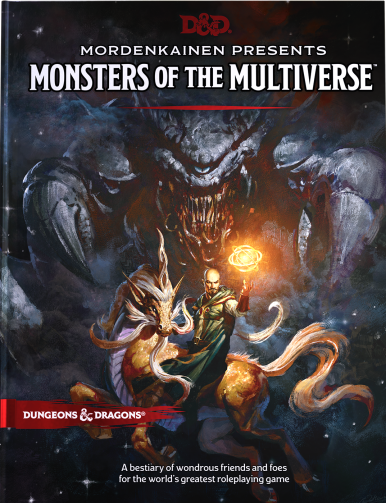 I’ve been waiting for Mordenkainen Presents Monsters of the Multiverse for a while, since it was announced. Not only were we going to get redesigned monster stats for several creatures, but the odds were that we were going to see a good number of player option ancestries reworked using D&D’s more recent design philosophies.

Since Volo’s Guide to Monsters wasn’t going to be part of the set, it seemed like those extra species were going to end up somewhere, especially since it became clear that WotC didn’t want to let some of the more problematic elements of earlier 5e releases stand. As it turns out, yes, there were updated versions of several ancestries.

So, Who Gets Updated

Here is the list of races that were updated for Monsters of the Multiverse (and no, we haven’t officially replaced the term race yet in this volume):

That’s a lot of player options. Not only does this pull in the Volo’s Guide to Monsters player options, but it also mines sources like the Elemental Evil Player’s Guide, Eberron, and some of the races from the Magic the Gathering settings.

If you haven’t caught some of the changes to races that have appeared in the last few D&D books, this volume has some of those recent changes listed up front. Instead of presenting more flexible ability score bonuses as an optional rule, none of the races presented have assigned ability score bonuses. It’s just standard to assign a +2 and a +1, or three +1s to ability scores.

There are no alignments listed for any of these races. In many cases, some of the ancillary material surrounding the creature doesn’t appear here, for example, when the race might have had special background options. That said, a few still have some random tables included in their entries.

There is also a recurring change to how movement speed is referenced. For most of the species that might have a flying or swimming speed, instead of stating the movement speed separately, it universally says “you also have a [flying/swimming] speed equal to your walking speed.” Since those are coupled, that would make me think that anything that increases a character’s walking speed is also going to increase their special movement.

Another recent trend that continues here is the spellcasting abilities that are often racial abilities. Not only do these spells allow the player to pick intelligence, wisdom, or charisma as their casting stat, the spell ends up being a spell they can use with any spell slots they have from class abilities as well.

Goliath (Have these shown up more places than anyone else at this point in 5e?)

While Fairy, Harengon, Satyr, and Shadar-kai all get reprinted, none of them end up mechanically altered. I would have been shocked if Fairy and Harengon got reworked this soon after their premier.

What Can We Draw From All This?

I don’t know, I’m pretty sure we can count on abilities being usable a proficiency bonus number of times being foundational to design for quite a while yet. In a few cases, we even get to see it used for things like bonus hit points and damage. I personally like that because it means ability score bonuses aren’t scuttling some interesting abilities.

We’ve already seen this in recent design and in Unearthed Arcana, but I like those abilities that give a player character a new spell also allows a character to cast the spell with their standard spell slots. It makes sense, and it also means that maybe if someone really wants to play into their theme, they can choose to use their resources to do this.

I am completely on board for adding fey ancestry to goblinoids. I’ve always pictured goblins being associated with the fey courts just based on their place in folklore. It’s also something that happened in Shadow of the Demon Lord, and it thematically feels right. I appreciate the idea that hobgoblins being organized and group-oriented can play into being soldiers as well as just collaborating with other beings. I really want to have a bugbear roll out of a little hole and say “surprise!”

It feels like the current paradigm is to assume everybody gets to move at 30 feet, with a few especially “speedy” options picking up some extra movement. Over multiple editions, I can attest to the pain of some species getting penalized when they are trying to get from A to B as a group. Heck, it made goblins potentially better small party members than other established races.

Increasing the range of races that can be small not only reinforces that some species do have a wide range of sizes, but it also allows for wider backstories. For example, if you want to describe your aasimar as being a halfling with celestial powers, or your earth genasi that’s a gnome with elemental affinities, you have some support for that concept.

The Road Not Taken

Seeing some of the choices made in this book, I wonder about why some other changes didn’t happen. For example, if a centaur can be a fey creature, what happens if you make goliaths and/or firbolg into the giant type? Are those options too powerful to gain immunity to some common humanoid targeting spells and abilities?

It’s interesting seeing the line that the designers have to walk to move cultural items out of racial descriptions. Several of these options have “affinity” or “instinctual” abilities that grant skills, with the flavor trying to avoid a monoculture. I get that in some ways, you can say that things like perception are an example of exceptional senses, although it feels like we’re cutting things a little thin by assuming people are born into being good at survival or nature knowledge.

I can appreciate the trickiness of transitioning away from monoculture assumptions and the ubiquitousness of bonus skills as a reward for player options. I wonder if this divide would feel more comfortable if the species that get bonus skills were all races that have types other than humanoid. For example, it might feel different to say that fey creatures have intrinsic knowledge of nature. If you make a goliath the giant type, does that make it feel different to give them athletics?

This time around, I don’t really have any “final thoughts.” I still have a lot more of this book to read, but I really like that the designers are pushing the paradigms of the game beyond what they have been, while still pushing them in a logical direction.