What Do I Know About Books? Dragons of Deceit (Dragonlance Destinies Book One) 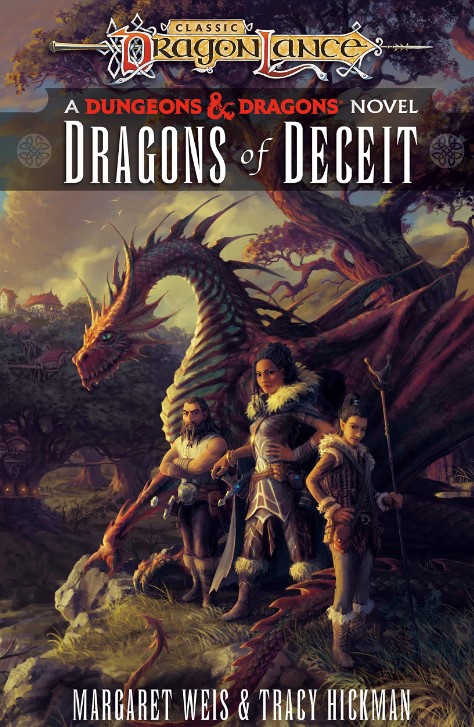 This Bank of the River

Our primary protagonist in this story is Destina, the daughter of an Ergothian woman and a Solomnic Knight. We get to see the events of the War of the Lance and the events of the Chronicles trilogy from an outside perspective, as Destina sees her family and their fortunes fall apart in the aftermath of the recent, dramatic events.

Destina’s quest to reverse the fortunes of her family take her to various locations across Ansalon, and eventually lead her to encounter some of the Heroes of the Lance. Despite this fateful meeting, it remains solidly Destina’s story.

Shadows of the Past

I know that a lot of my nostalgia for older D&D fiction is going to be tainted by being aware of the problems inherent in the assumptions of those novels. Compared to more modern sensibilities, there are some uncomfortable issues due to race or ethnicity, both between D&D races and different human peoples.

There are also a few incautious comments that are dismissive of modern issues in a way that I don’t think are intentional. For example, there are a few commentaries about people “needing to accept the bodies the gods gave them,” when discussing transformational magic, as well as a song that, while it has different verses with “he, she, they,” seems to pretty definitively frame marriage as an institution between a “he” and a “she.”

There is thankfully an important section of the book where assumptions about an entire race are challenged, contextualizing why that race has been relegated to a disadvantageous position in their society that has more to do with economic fortunes and religious biases than with the perceived evil nature of the species in question.

There are also a lot of words used to assure us that the protagonist is a very attractive woman. After a while, when that seems to be an established fact, we get a few more places where it’s reinforced.

Back in the Stream

This is probably my favorite Dragonlance novel by Hickman and Weis since the Dragonlance Chronicles. I’m not quite as invested in the story as I was with those, but I’m much happier with how the story progresses than the narrative that evolved from Dragons of Summer Flame, The War of Souls, and even the Lost Chronicles.

Some of the more recent Hickman and Weis Dragonlance novels have felt like elements of the setting that were established later in the timeline retroactively became true even in earlier stories. Sturm is more pragmatic long before he becomes introspective enough to fully contextualize his honor. Raistlin is the Chosen of the Gods right from the start, almost unable to make a mistake due to his amazing intellect and force of will. Gods that made their influence known in more subtle ways show up, often, plainly explaining their plans and intentions.

This book feels a lot more like visiting an old friend again, even if many of the characters are new. Cosmic-level events are framed from the perspective of mortals. There are fewer archetypal personality traits that present themselves whenever an established character appears. There are also some tantalizing new aspects to Krynn’s cosmology revealed. Telling this story from a new character’s perspective seems to make the story flow much more naturally.

The Flow of the River

This is a fun book, as well as one that hits a lot of the notes that Dragonlance fans are going to be looking for. Destina is a likable protagonist, who still manages to come across as competent despite the number of times we are reminded how attractive she is. The new supporting characters are interesting enough that I want to see them reenter the narrative, and despite Tasslehoff showing up so many times in various Dragonlance books, his vector into this story is novel and different than we’ve seen in other books that feature the kender.

The Ripples and the Stones

I enjoyed this novel, and it managed to be what I wanted in a Dragonlance novel. That said, this definitely isn’t the best “entry point” into the series, and it’s hard for me to say how much I would enjoy this novel if it wasn’t standing in contrast to some of the other novels I read which were less engaging to me. It’s also hard to fully disengage my affection for the setting from the very formative time when I read them.

That said, this is a well-paced, engaging novel, with fun characters, and lots of flaws to navigate. While it’s not a paradigm-changing narrative, it’s much better than a lot of the game-related fiction I’ve read in my lifetime. For anyone interested in returning to Krynn, it offers new characters, new stakes, and new revelations, but told in a manner that feels closer to the original trilogy that the most recent novels in the series.