What Do I Know About First Impressions? Arcadia Issue 19 (5e OGL)

Once again, I come to you a few days after the latest issue of Arcadia has already been released, because, wow, has there been a lot going on. I don’t know if you know this, but there have been a few things going on with D&D lately. But here we are, ready to dive into this month’s issue.

I was provided a review copy of Arcadia Issue 19, as I have been since the magazine first started publication, however, I’ve also been a Patreon backer for the entire run, which means I just get my review copy a few days earlier than my Patreon copy. I have reviewed several MCDM products in the past, and while I haven’t used any of the material in this article, I am familiar with D&D 5e both as a player and as a DM. 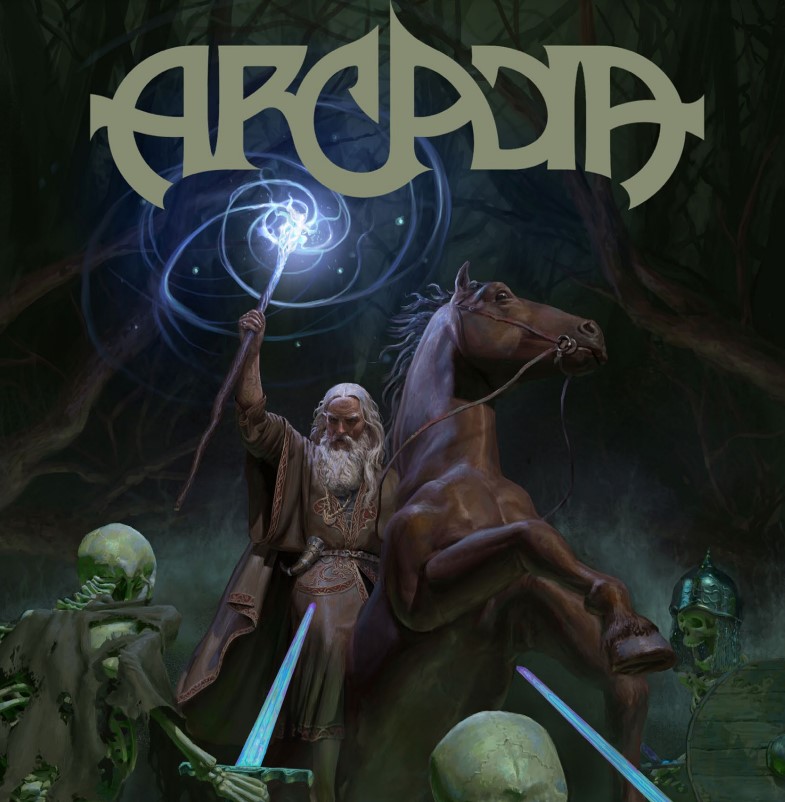 This month’s issue of Arcadia is 35 pages long, including a credits page, a table of contents, the letter from the editor, a resource page with links to various maps, an author bio page, and an OGL statement page.

This month has the following articles:

The focus of this article is to present cursed items as items that can provide story elements for a campaign. Part of this is achieved by creating a risk versus reward dynamic, making items dangerous but useful, but this article also introduces the idea of redeeming cursed items. Items created using these suggestions may have a means of cleansing them, which removes detrimental effects and may change the powers of the item.

There is about a page of discussion about how to design an item with this kind of curse. This includes detailing the item’s history, purpose, how it was cursed, and what can lift the curse from the item. While a player character that has been cursed to wield the item might be freed by a remove curse, the process of removing the curse from the item itself is a more detailed process.

As it introduces these concepts, the article uses examples pulled from the three magic items introduced:

The Scepter of the Unanointed is an item used to imprison a demon. The demon can communicate with the wielder, and occasionally twists spells cast by the scepter. It also (surprise) lies about its nature when communicating with a new wielder. The demon attempts to trick a wielder into destroying several specific sites that would allow the demon to escape, and cleansing the item involves visiting those sites and meditating on 15 different virtues.

The Boots of Tartarus grants their wearer resistance to heat and the ability to travel to the Ethereal Plane, but were used to trap a group chain devil in a demiplane. There is a chance that the users are transported to the demiplane prison when they use the ability to travel to the Ethereal. The only way to remove this threat and unbind the devils is to track them down in the prison and destroy them.

The Amulet of the Seer’s Eyes allows the character to cast various divination spells, in addition to allowing the wearer to look through the amulet to see with darkvision. The curse of the item is that it gleans information from multiple realities, where the information provided by the divinations is just slightly wrong for the caster’s current reality. The user can only cleanse the item by traveling to the Oracle Engine and freeing themselves from their fate, and if the caster fails, they are haunted by time wraiths, attempting to keep realities separate and free from tampering.

The concept of this article is great, and the example magic items are all strong. If there is anything I would have rather seen, it would have been a few more “generic” examples of curses and purification rituals, but I also think the examples are clear enough for a DM to work from.

Divine Trials: Shadows of the Moon

A couple issues back, we saw the first article in this series, which presented The Sun Trial. That trial was all about humility. The Moon Trial, by contrast, is about isolating your flaws and mastering them.

To use this trial, the DM and the players need to isolate something that feels like the PCs most important flaw. The adventure itself gives the following examples, and while it allows for people designing flaws outside of this list, the DM will be a little more on their own for providing details in some of these encounters:

To be honest, that’s probably a good list to start from regarding adventurers.

The trial is composed of three rooms, each with its own test. One trial involves facing stained glass images representing a character’s individual flaws, which triggers a personal scene for each PC to be quickly resolved. The second part of the trial involves traveling through a dark maze, while being stalked by a new lunar themed monster. The monster’s attack has a different effect based on the flaw of the individual being targeted. The final trial involves the PCs facing versions of themselves that have been fully given over to their flaws. This trial involves a lair action based on four phases of the moon, with the moon revolving through its phases each round.

The reward for facing this trial, in addition to learning more about their personal flaws, is a ring that is themed for illusion and moon magic. If the DM is using all of the trials, the celestial that introduces the trial may reference the other trials, without describing when or where those trials will occur.

I enjoyed the Sun Trial, although I felt like it was easier for the PCs to miss what was being tested with a few reminders. I really like this trial. It feels a bit clearer and more focused on the PCs dealing with their shortcomings. After seeing both of these trials, I’m very interested to see what the Star Trial looks like, as well as the framing narratives that will accompany that article.

Break in Case of TPK!

This article presents three encounters that are meant to help mitigate the campaign ending consequences of a total party kill. Each of these encounters allows the PCs to return to life by playing through the encounter and navigating the trials they have been presented.

These include the following:

The first encounter sees the PCs with their souls gathered by a night hag, who reincarnates them as beets. She turns souls into sapient beets to use in her cooking. There are a number of items in the PCs cage that may allow them to escape, but they can also bargain with the hag by agreeing to do things like bringing her news or ingredients for her cooking.

The second encounter finds the PCs souls captured by a lich who is willing to return them to life, so long as they bear his Nine Lives stealer into the mortal realms and collect souls for him. If they manage to escape without making the deal, they end up being free roaming ghosts until they can find some bodies to inhabit.

The third encounter involves the PCs souls having been collected by agents of Hell, and put on trial. The process is generally a farce, but the judges are open to being bribed, giving the PCs several options for escape. They can pledge themselves to take on the Illrigger class (basically becoming an agent of Hell), sign a contract (usually forfeiting their soul as soon as they die next time), or bribe the court with a certain amount of treasure, granting them a continuance that lasts 666 years.

The final encounter involves creatures created by a trickster deity to capture souls and store them in a diamond fortress in the Astral Plane. PCs can convince the strange creatures to let them return to life, since as adventurers they will be sending more souls for the creatures to collect.

I like all three of these examples. I have, in my own campaigns, used campaign elements to interact with PCs that have died, for example, having devils in the Fugue Plane bargain with player characters that have died in Forgotten Realms campaigns I have run. Some of these encounters are begging to have follow up adventures, as well. For example, a trickster god collecting souls before they reach the afterlife seems like it might end up being a big deal of other deities figure this out, and what happens if the devil’s courtroom is overstepping its bounds in the hopes of gathering a few more deals or at least tons of treasure based on their granted continuances.

It is a little weird to me that the flurgnobs, traveling through the Astral and collecting souls, clearly capable of reasoning and higher thoughts, are given the beast type.

This issue has plenty for people to use in their ongoing campaigns. It’s a little hard for me to come up with a favorite article this time around, because all of them are kind of neat within the purview of what they mean to address.

My only real note is that Arcadia is great at coming up with concepts, and as part of their table ready focus, they make it really easy to implement encounters or adventure elements, but in a few cases, I would love a few more rules-based tools outside of the provided examples.

I would be happy with sequels to any of these articles. I know we’re already getting one more trial and some framing material for them, so I don’t know if that counts as a wish, since it seems like a done deal. I would actually like a full follow up adventure dealing with the trapped souls in the diamond fortress mentioned in the TPK article.

Less directly related to these particular articles, I would love to see more templates, monsters, player facing options, and spells. I know that you can flood the fanbase with those things, but they are also some of the items that flare my creativity more than just about anything else.

See you all next month. Well, for Arcadia reviews. I may see you sooner otherwise.