What Do I Know About First Impressions? Lost to the Aether (Pirates of the Aetherial Expanse Episode 4, 5e OGL) 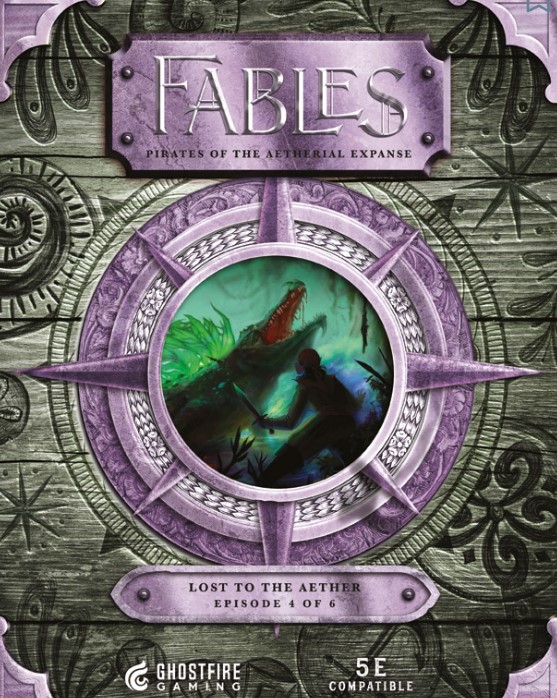 It’s taken me a few extra weeks to get back to this one, but before the month is up and the next installment is out, I wanted to take a look at this month’s installment of Fables from Ghostfire Gaming. We are up to episode four of the latest campaign, with only two more installments to go.

I was not provided a review copy, and this review is based on my own subscription to the Fables series. I have not had the opportunity to run this adventure, but I am familiar with D&D 5e, both as a player and as a Dungeon Master.

Episode 4: Lost to the Aether

This month’s PDF is 82 pages long, including end pages, a title page, a credits page, a table of contents, two pages of handouts, a four page pronunciation guide, and a full page OGL statement.

As with previous installments, the initial six pages are the recurring introduction of the product line and this particular campaign, including summaries of each of the adventures. While there are new monsters, several are reprinted from previous adventures where they have appeared already in the campaign.

As for the rest, it’s a two page attractive layout that is very similar to the official formatting used in D&D products, but with unique colors and fonts. There is lots of full color art, with atmospheric uses of blues and purples.

The adventure is divided up into the following sections:

The Sistren of the Constellation Isles, a faction introduced in the previous adventure, are the primary focus of this adventure as well.

The adventure starts with an NPC from the previous adventure offering a reward if they can find the legendary artifact known as the Mermaid’s Tears before less scrupulous treasure hunters can find the item. The first thing the PCs are expected to do is to gather more information on the location of the Tears from a member of the Sistren on the Constellation Isles.

This follows the pattern of the other adventures in this series, where the PCs can encounter various NPCs and monsters on the way to their meeting, and in the course of these encounters, may pick up some side missions to negotiate or fight with a dragon turtle, or lay some ghosts to rest.

Once the group has reached the Constellation Isles, the PCs can once again encounter a host of locations with NPCs that may ask the PCs to undertake some tasks for them. They may also earn an honorary sign of the Sistren, which not only makes getting supplies on the island easier, it may also make later parts of the adventure simpler.

If the PCs explore the island beyond their meeting with Eldari, they can also latch on to another sub-plot in the adventure. While the Astral Merrow are seen as a threat throughout the Aethereal Expanse, the PCs have the opportunity to meet with a less outwardly aggressive Merrow leader who might be willing to help them in their quest.

The Sistren operative Teagan knows more about the Mermaid’s Tears, but she is being held in a nearby Astral Merfolk settlement, and the PCs will either have to break her out of prison or negotiate for her release in order to obtain her help. Teagan has her own motives for retrieving the Tears beyond just returning them to the Sistren.

This section of the adventure ends when the PCs reach the Bog Graves in Equino Minor and navigate through passages known as The Pipes, while dealing with a variety of creatures from Aether Crocodiles to Sea Hag covens.

Once the PCs reach the Sunken Palace, they can encounter characters like Ren the Coutl and Akora the Sphinx, and learn some of the history of the Pearls and the older civilizations that were native to this region of the Expanse. The Tears themselves were used to punish Merfolk traitors and turn them into Astral Merrow, and the Tears may be used to reverse the curse put on them.

Eventually, as the PCs find the Tears, Teagan puts them on, and uses them to awaken a giant Feathered Star (an enormous starfish like celestial creature), which she commands to go on a rampage. At this point, the PCs can try to free Teagan, fight her, take control of the Feathered Star, or kill it. The PCs may have learned how to use the Tears to remove the curse on the Merrow, which doesn’t change any current Merrow, but keeps future generations of Merrow from being born.

One aspect of this adventure that is strange is that the meeting with Eldari is considered optional. The PCs can go looking for Teagan and head off for the Sunken Palace without any of the extra information or supplies they might otherwise have. I don’t have a problem with this, so much as the fact that there really isn’t anything pointing the PCs to visiting the Merrow to find out that maybe some of the assumptions about the Merrow are overly broad, and to give the PCs some sense that the Merrow have a hand in their own potential fate.

There has been a lot less “hard framing” of situations in this series of adventures, but the adventure seems to be written assuming that Teagan will get to the Mermaid’s Tears before the PCs in order for the final climax to unfold as expected.

There is something that feels kind of uncomfortable in the Astral Merrow story where we have been introduced to two separate Merrow NPCs that aren’t mindless killers, but it also seems as if the story doesn’t consider it a bad thing if the PCs wipe the Merrow out as a species by making sure no more of them are born. And that’s another problem with the Astral Merrow story . . . these aren’t just Astral Merfolk who were cursed, these are the children of children of Astral Merfolk who were cursed. It feels like this section of the story could have used a little more thought, and maybe pulled Ronen into the story as an active participant in her people’s fate.

I am happy that this campaign has maintained the mission + site based adventure structure that the earlier adventures have. I like that this gives the PCs the opportunity to resolve some tasks in the order they want, and that they may have some optional tasks and rewards if they spend time exploring. I do think that some of the “optional” encounters may be better if they weren’t optional.

This is going to sound terrible, but if I have one big wish, it’s that the new ship rules will remain to be essentially optional to resolving most of this campaign. They have only been lightly touched on up to this point, and it feels like it might be easier for people to adopt this campaign without learning an alternate ship combat system. I have a feeling that the final adventure, at least, will engage with those rules in a less optional manner. We’ll see.